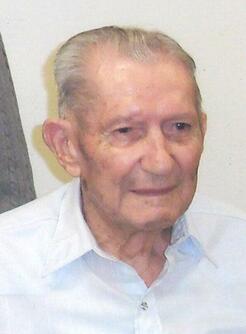 Harland P. Epp, 100, of Aurora, formerly of Henderson, died Saturday, June 03, 2017 at Aurora.
He was born Nov, 21, 1916 in York County to Peter M. and Margaretha (Rempel) Epp on a farm two miles south of Henderson. Harland began school in District 31 and finished the eighth grade in District 62, two miles north of Henderson. When going to school he rode horseback, graduating from Henderson High School in 1935.

While growing up he played the banjo with his brother, Eldon, who played the guitar at church and on various occasions.
Harland found the love of his life, Lillie Friesen, and four years later, on April 16, 1939 they were married. To this union were born four children: Joann, Kenneth, Julia and Philip.

Upon his profession of faith, Harland was baptized on June 5, 1938 by Lillie’s uncle, Reverend A.W. Friesen, and accepted into the fellowship of the Bethesda Mennonite Church. He was a lifelong and faithful member and served as a church usher.
Harland and Lillie farmed for 16 years, until they moved to Henderson in 1955 and started up a grocery store – Epp’s Supermarket. After closing his grocery store, Harland was hired as an assistant manager at the Jack & Jill Grocery Store in York. While he worked in York, he worked his 40 hours in three days and in his spare time he worked on the house which included digging a small basement by hand and finishing it. His son, Philip, poured the concrete and built the steps to finish the project. Harland also built a green house, started tomato plants from seed, planted 100 tomato plants and sold them to a local restaurant.

Memorials may be directed to the Bethesda Radio Fund.