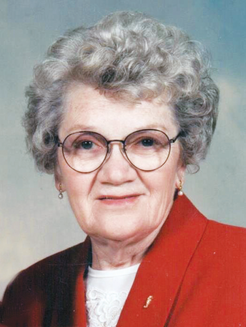 She was born June 16, 1922 in Beaver Crossing to John and Hulda (Blum) Burhoop. On June 16, 1943 she was united in marriage to Walter D. Naber at St. John Lutheran Church in Waco.  During Walter’s years in the Army Air Force they lived in Texas, California and Mississippi. Following Walter’s discharge, they returned to Waco where they lived and worked on the farm until moving into York in 1975. They traveled many miles in their motor home until Walter’s death in 1987. In 1997 Gladys married Elmer Straube of Grand Island. The two of them enjoyed dancing and traveling.

In addition to her participation in various church activities at St. John in Waco and Emmanuel Lutheran in York, she enjoyed gardening, sewing, playing cards and games, walking, and swimming. Gladys developed photos for the York News-Times for many years and helped cater meals for the Chances R with the church ladies. She enjoyed going on trips with the York Fun Club. Gladys loved spending time with her family and shared many special memories with her grandchildren.

Left to mourn her passing are her sons, Doyle Naber and wife Janet of Waco and Lynn Naber and wife Barb of Kearney; grandchildren, Wendy (Matt) Rathjen of Waco, Denise (Alan) Ehlers of Madison, Heather (Adam) Chase of Bradshaw, Adam (Jenny) Naber of Smithville, Mo., Katherine (Tyler) Bombeck of Leander, Texas and William (Sarah) Naber of St. Joseph, Mo.; 17 great-grandchildren; two great-great-granddaughters; plus a host of nieces and nephews. Also surviving are step-daughters, Carol, Anne and Mary and their families.

Gladys was preceded in death by her parents; husbands; sisters, Ella Rhodes and Stella Hoffschneider and her brother, Elmer Burhoop.

A Celebration of Life service will be held at 2 p.m. Tuesday, June 16, 2015 at Emmanuel Lutheran Church in York. Private inurnment will be in the Waco Cemetery at a later date. There will be no viewing or visitation as Gladys has chosen to be cremated. Memorials may be directed to the donor’s choice.   ​