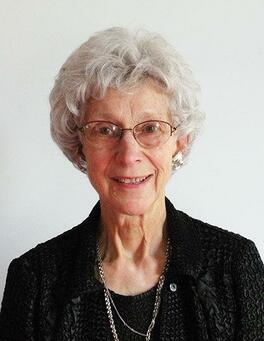 Gertrude Caroline (Richert) Bredehoft was born at York on Aug. 6, 1929 to Samuel and Caroline (Heiden) Richert.

She was born the fifth of nine children.Gertrude’s grandfather, Charles Richert, a Union solider in the Civil War, settled in York County after the war. She went to her Eternal Home on April 11, 2016 at the age of 86 years, 8 months and 5 days after a brief battle with pancreatic cancer.

She graduated from Benedict High School with the class of 1947.

Gertrude worked as a telephone operator in York for two years, before marring Roland John Bredehoft of Waco on June 5, 1949 at St. Paul’s Lutheran Church. They resided on a farm northwest of Waco raising shorthorn cattle, hogs and chickens in addition to

farming. They were blessed when their daughter, Deborah, was born. After Roland’s sudden death in 1986, Gertrude remained on the farm for nine years before moving to York.

Gertrude was an avid bird watcher, and could tell you the name of each one and fed several species in her back yard. The rest of her yard was devoted to many colorful and beautiful flowers that she graciously shared “a start” with anyone who wanted it. Gertrude’s flowers graced her church and were often placed in nursing home or taken to shut-ins. In addition to being a farmer’s wife, Gertrude taught Sunday School, VBS, was a 4-H leader, choir director and pianist for her church, held several offices for church organizations and a kind-hearted friend to many. Gertrude never missed an opportunity to witness to her Lord and Savior. She loved religious and Christian music and attended many local concerts and encouraged the young people in their music.

Due to live streaming for relatives unable to attend, funeral services will be held at Emmanuel Lutheran Church in York on Tuesday, April 19 at 2 p.m. with interment following in the Waco Cemetery. Lunch will follow at Peace Lutheran Church in Waco, where Gertrude was a member for sixty-seven years. Visitation will run from 5-9 p.m. Sunday, and from 9 a.m. - 9 p.m. Monday. The family will greet friends from 6:30 - 8 p.m. Monday evening at the mortuary. The family suggests memorials be made to Mission Central.​