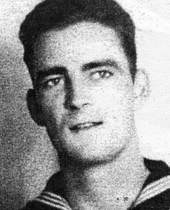 Fred W. Thomas, age 93, of York, NE, died Friday, February 16, 2018 at York. He was born May 1, 1924 in Sabetha, KS to William O. and Ethel (McNary) Thomas. Fred served his country in the Navy during World War II. On October 3, 1947 Fred was united in marriage to Melva Vice at Seneca, Kansas. He worked as an auto mechanic and truck driver for Paul Geis and Nelson Buick. He also owned T&B Automotive and Thomas Auto Repair. He was an avid reader, enjoyed bowling and playing volleyball, as well as working with electronics.

​He is preceded in death by his parents, wife, his son Paul, 2 brothers, 2 sisters, and one great-grandchild.
Funeral services were held at 10:00 AM, Thursday, February 22, 2018 at the New Life Church of the Nazarene, York with the Reverend Dave Martelle officiating. Interment with Military Honors at Greenwood Cemetery, York. Memorials may be directed to the York County Veterans Association.