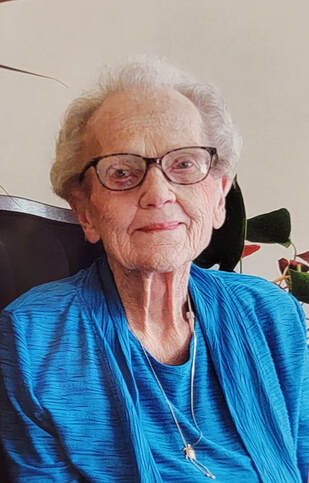 The good Lord took Faye Marie Petersen to her heavenly home on April 12, 2022. She died in York, NE at the age of 87 years. Faye Marie Petersen was born May 14, 1934 at her maternal grandparents’ home in Utica, NE, to Ernest and H. Esther (Rurup) Rieger. Faye was baptized December 22, 1946 at Utica Methodist Church in Utica, NE. She became a member of Trinity Evangelical Lutheran Church, Cordova, NE in 1970 where she remained a faithful member until her death.

Faye grew up on a farm south of Utica with her parents, brother, and sister. She received her early education at a rural school, District #72 and graduated from Utica Public School District #62 in 1953. Faye continued her education at Nebraska Wesleyan and taught grades 1-8 at a country school in Goehner, NE 1951-1953. She also taught at a rural school, District #97, in York County 1953-1954.

Faye was united in marriage to Maynard Leroy Petersen on June 7, 1953, and made their home on a farm near the Blue River until 1992 when they moved to York. They were blessed with three children. During these years she was a full-time wife, mother and homemaker. You could find Faye in the midst of farming with Maynard yet finding time to attend all the academic, musical, 4-H and sporting events of her children (and later as many activities of the grandchildren she could). After the children were grown, she cleaned houses and clerked auctions around the York and Cordova communities. Faye was a member of the Danish Brotherhood in America, Eastern Star, Nebraska State Genealogical Society, and the neighborhood clubs, Cheerylott and Up N Atom. She also taught Sunday School and was involved in 4-H as a leader and board member through the years.

Family and friends were of utmost importance to Faye. All will miss her kindness, thoughtfulness and generosity she shared freely in her frequent cards and letters. She loved spending time and making wonderful memories with her children, grandchildren and great-grandchildren. Family history, writing letters, quilting, embroidering, word puzzles, and garage sales/flea markets were hobbies she enjoyed through the years. Upon her move to Willow Brook in August, she was able to reunite with old friends and make new friends. She was very appreciative of the care, kindness and conversation provided by the staff from every department.

Funeral services will be held at 10:00 a.m., Monday, April 18, 2022 at Trinity Evangelical Lutheran Church, in Cordova, NE with the Reverend Michelle Kanzaki officiating. Interment will follow in Zastrow Cemetery, in Cordova. Visitation will be held from 2-8p.m., Saturday, April 16, 2022, at Metz Mortuary, in York. Memorials may be directed to the family for later designation.
​
The family requests you send a card and hand written letter to those you love, in memory of Mom.