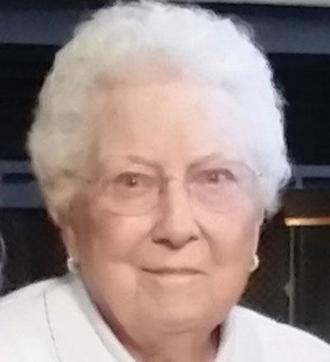 Fay Loraine Hinze, age 92 of York, died Saturday, March 24, 2018 in Edmond, Okla. surrounded by her family.
She was born Feb. 27, 1926 in Fillmore County to Carl and Elsie (Alfs) Goesch. She was united in marriage to Floyd C. Hinze on May 20, 1950 at Emmanuel Lutheran Church in York.
Fay had received her teaching degree after high school and taught early on. She also had worked at Cornerstone Bank for over 25 years, as a teller and executive secretary. She worked part-time for J & R Heating before retiring. Fay was a member of Emmanuel Lutheran Church, where she also belonged to the LWML. As a member of the LWML, she spent countless hours helping to make quilts. Fay enjoyed reading, crocheting, and playing cards. She enjoyed spending time with her family and attending their activities.
She is survived by her daughters, Twyla (Robert) Braly of Edmond, Okla. and Beverly Calvert of Duncan, Okla.; grandchildren, Jennifer Braly McKenzie of Cement, Okla., Ryan Janda of Lawton, Okla. and Matthew (Megan) Janda of Oklahoma City, Okla.; great-grandchildren, Kersten and Casen McKenzie of Lawton, Okla. and Juniper Janda of Oklahoma City, Okla. She is also survived by her sister, Wanda Apetz of York; sisters-in-law, Elaine Heiden and Marjorie Morberg, both of York; and nieces and nephews.
She was preceded in death by her parents; husband; son-in-law, Roy Calvert; three brothers-in-law, Dwight Morberg, Lowell Heiden and Lee Apetz and niece Gail McLean.
Funeral services are scheduled for 10 a.m., Tuesday, April 3, 2018 at Emmanuel Lutheran Church with the Reverend Mike Neidow officiating. Burial will follow at Greenwood Cemetery, York. Visitation will be held from 1 - 8 p.m. Saturday, closed Sunday, and 9 a.m. – 8 p.m. on Monday, with family greeting friends Monday evening from 5 – 7 p.m. at the mortuary. Memorials may be directed to the family for later designation.