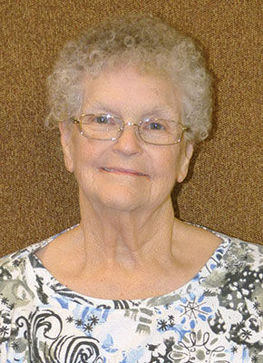 Evelyn E. Collingham, age 79, of York, died Tuesday, Dec. 26, 2017 at York.
She was born on Sept. 1, 1938 in Hillsboro, Ore. to Floyd and Marjorie (McPherson) Lindbloom. On Nov. 6, 1954 she was united in marriage to Rollan D. Collingham. Evelyn worked at Hinky Dinky and Grand Central Food in York.
She was a member of the Windemere Baptist Association in the Lake of the Ozarks for 20 years. Evelyn enjoyed crocheting, knitting, camping and cake decorating. But most importantly, she loved and enjoyed spending time with her family.
She is survived by her daughters, Tracey (Kevin) Wallace of York and Darlene Myer (Chuck Wetzel) of York; son, Allen (Linda) Collingham, of Greenwood and daughter Sandra (Kevin) Marsh of York and Randy (Melinda) Collingham of McCool Junction; daughter-in-law, Beverly Collingham of York; 14 grandchildren; 47 great-grandchildren and three great-great-grandchildren. She is also survived by her brothers, Floyd (Maria) Lindbloom of Eagle, Ala. and Daniel (Roberta) McPherson of Boise, Idaho; mother-in-law, Clara Ervin of York, along with several nieces, nephews, and a host of friends.
She is preceded in death by her parents; husband; son, Stanley, and sister, Barbara York.
Funeral services are scheduled for 10 a.m., Saturday, Dec. 30, 2017, at Metz Chapel in York with the Reverend Jon Hawkins officiating. Interment will follow at Greenwood Cemetery in York. Visitation will be held from 1 – 8 p.m., Friday, Dec. 29, with the family greeting friends from 6 – 7:30 p.m., at the mortuary in York. Memorials may be directed to the family for later designation.
​Metz Mortuary, York is handling arrangements.