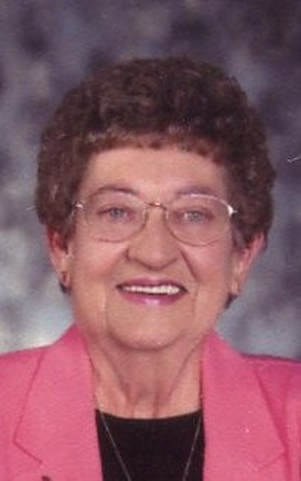 Eva Marie (Hobson) Liermann, age 85 of Waco, NE, passed away Monday, September 10, 2018 at her home in Waco. She was born March 31, 1933 to Zee and Nellie (Ballard) Hobson in their family home in Waco. She graduated from Waco High School in 1952 after missing a year due to Rheumatic fever that had kept her quarantined in her home. She was united in marriage to Virgil Liermann on March 8, 1953 at Peace Lutheran Church in Waco. This union was blessed with three children.

In 1960 Eva and Virgil opened Liermann’s Standard Service in Waco. They continued to own and operate the business until their retirement in 1995. Eva enjoyed many years of bowling on the Liermann’s Standard Service team, painting numerous oil scenery pictures, was active in Peace Lutheran Ladies Aid, the Legion Auxiliary, watching Husker football and volleyball and enjoyed watching the many types of birds that gathered in her yard. She and Virgil loved their yearly family vacations to Minnesota.

Funeral services are scheduled for 10:00 a.m., Friday, September 14th 2018 at the Peace Lutheran Church in Waco with the Reverend Charles Ramsey officiating. Burial will take place in the Waco Cemetery with memorials being directed to Tabitha Hospice Foundation. Visitation will be from 5:00-8:00 p.m., Wednesday and continue all day Thursday from 9:00 a.m., - 8:00 p.m.