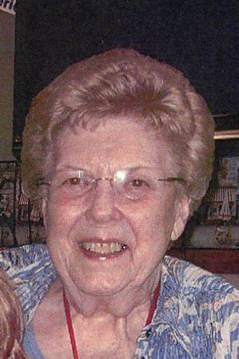 Etta Jean Janzen, age 88, of Henderson, NE, died on Friday, April 20, 2018 at Henderson.
Etta Jean was born in Sutton, NE at home on December 10, 1929 to Elmer and Eva (Stites) Plettner, the fifth of six children. She received her education at Sutton Public Schools, graduating in 1947. She was baptized upon her profession of faith in Jesus Christ during high school.
Etta Jean married Henry Janzen of Henderson on December 14, 1950 at her parents’ home in Sutton. She was employed at various jobs throughout the years. Her first job was working for her father at the Cream Station in Sutton. Other jobs before marriage included serving at the soda fountain at the Sutton Pharmacy and Dan’s Café as a Waitress. After marriage Etta Jean helped her husband, Henry, with farming. Many jobs during and after farming included working at the egg hatchery in York, cooking at the Henderson Hospital, working as a bank teller and book keeper at Henderson State Bank, and lastly as a book keeper at Midwest Irrigation. During retirement Etta Jean enjoyed quilting and traveling with her husband. She was a member of Bethesda Mennonite Church, and active in the Mission Circle.

​She is survived by her sons Stan (Diana) Janzen of Daytona Beach, Florida, Michael Janzen of Henderson, Terry Janzen of Olathe, KS, and daughter Patti (Steve) Barr of McKinney, TX. Grandchildren include John (April) Barr of Plano, TX, Jason (Bethany) Barr of Lincoln, NE, Jennifer (Justin) Blazek of McKinney, TX, and Jeff (Ashley) Barr of Humble, TX. She is also survived by 9 great grandchildren.
She was preceded in death by parents, husband, brothers Elmer, Earl, and Elden; sisters Eva Bitterman and Evelyn Hardin.
Graveside services were held at 9:45 AM, Wednesday, April 25, 2018 at the Friesen Cemetery, southwest of Henderson. Memorial services followed at 10:30 AM at the Bethesda Mennonite Church. Memorials may be directed to the Bethesda Mennonite Church Radio Fund.