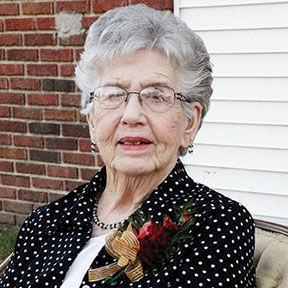 Ethel L. Doremus age 90, of Stromsburg, passed away peacefully on March 23, 2015 at Stromsburg. She was born Nov. 8, 1924 in Custer County to George and Vera (Matthews) Catlett. On Oct. 27, 1946 she was married to Edwin W. Doremus at Central City. The union was blessed with four children, Cinda, Patty, Robert and David.

When Ethel was just out of high school, she worked as an apprentice at a beauty shop. She later was the head cook at Benedict Public School where she was fondly known as Grandma Ethel. She was a former member of Friendly Families Extension Club and enjoyed taking care of her garden and flowers. She was devoted to her family and was proud to have become a great-great-grandmother last September. Ethel was a member of the Benedict United Methodist Church. She will be missed and her memory cherished by all who knew her.

Preceding her in death were her husband; grandson Eddie; three brothers and three sisters.

Funeral services will be held at 2 p.m. Friday, March 27, 2015 at First United Methodist Church in York with the Reverend Dan Spearow officiating. Interment will follow at Pleasant Hill Cemetery, west of Benedict. Visitation will be from 3-9 p.m. Wednesday and from 9 a.m. - 9 p.m. Thursday at the mortuary. The family will greet friends and neighbors Thursday evening from 7-8:30 pm. Memorials may be directed to the family for later designation. ​