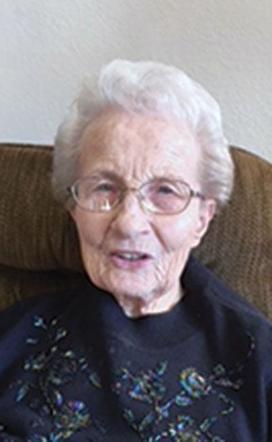 Esther Marie Rempel (Friesen) Wall went to her heavenly home on Wednesday Nov. 29, 2017.
Esther was born Oct. 4, 1927 to George T. and Olga (Regier) Rempel at Henderson.
She attended country school at District 80 in York County. She and her sister Elizabeth sang at some weddings and different gatherings with their mother Olga playing the piano for them. She also worked as a maid on various farms.
Upon confession of her faith Esther was baptized and joined the Bethesda Mennonite Church. On May 30, 1947 she married Milton Friesen. The marriage was cut short on May 30, 1949 when he was pinned under their car as he was working on it. He was the son of Thomas H. Friesen. They were married exactly two years. She then moved back with her parents, and when the Henderson Hospital was built in1950 she was asked to help work for Dr. Hamilton helping with many tasks.
On Jan. 24, 1951 Esther was united in marriage to Pete L. Wall at the Bethesda church in Henderson and started helping Pete on the farm while working with various doctors for some time. Esther
transferred her church membership to the Mennonite Brethren church after marrying Pete.
Esther is survived by a daughter, Shirley (Dennis) Kliewer of Bradshaw; sons, Clyde (Deb) Wall of Lincoln and Keith (Linda) Wall of Newton, N.J. She has four grandchildren, Tamara (Ryan) Wiens of rural Hampton, Tim (Jerilyn) Kliewer of Omaha, Kyle Wall of Maryland and Katelyn (Jorge) Hernandez of Katy, Texas. Esther has two great-grandchildren Mason and Mia Wiens of Hampton.
Preceding her in death were her parents; husbands, Milton Friesen and Pete Wall; brother, John Rempel; sister, Elizabeth Friesen; brothers-in-law, Levi H. Friesen and Ben L. Wall and sisters-in-law Lorene Rempel, Delores Rempel, Arlene Rempel and Alma Wall.
Esther’s life was very full as she loved helping people and her family.
Funeral services will be held at 10 a.m., Monday, Dec. 4, 2017 at the Mennonite Brethren Church in Henderson with the Reverend Luke Haidle officiating. Interment will follow at the MB Cemetery. Visitation will be held from 1-9 p.m. Sunday, Dec. 3, 2017 at Metz Mortuary in Henderson, with the family greeting friends from 7 - 8:30 p.m. that same evening at the mortuary in Henderson. Memorials may be directed to the Henderson Children’s Home, or to the Mennonite Brethren Church.