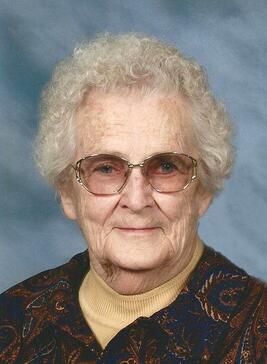 She was born March 5, 1928 in Hamilton County to Dietrich and Anna (Siebert) Friesen.  Esther and Daniel P. Friesen were united in marriage on August 26, 1948 at Henderson.  They lived and farmed in the Lushton/Henderson area until retirement.

Esther worked alongside her husband on the family farm as well as caring for her home and family.  She also had worked previously as an aide at the Henderson Nursing Home and at the Dutch Kitchen.  She enjoyed gardening, embroidery, quilting, cooking and baking.  Before Daniel’s death in May of 2014, the couple often traveled with the York Senior Fun Club.  Esther’s family brought her great joy and she loved being surrounded by her children and grandchildren.

Funeral services will be held at 2:00 pm Saturday, December 13, 2014 at the Bethesda Mennonite Church in Henderson. Burial will follow at Bethesda Cemetery. Visitation will be from 2-9 pm Thursday and 9 am-9-pm Friday at the mortuary in Henderson. The  family will greet friends from 7-8:30 pm Friday evening.  Memorials may be directed to the Bethesda Radio Broadcast.​