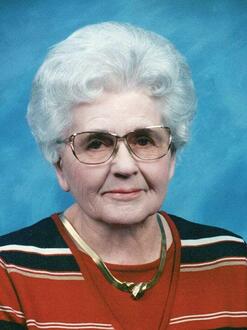 She was born March 23, 1920 near Lushton to John P. and Elizabeth (Friesen) Siebert.

On June 19, 1940, she was married to her childhood friend, Peter B. Epp. They were looking forward to celebrating their 75th anniversary this year.

Esther accepted Jesus Christ as her personal Savior and Lord at the age of 13 while attending the community Bible School. Upon the profession of her faith, she was baptized and became a member of the Bethesda Mennonite Church in Henderson.

Private graveside services will be held at 9:45 a.m., Saturday, Feb. 14, 2015 at Metz Mortuary in Henderson followed by a memorial service to celebrate Esther’s home-going at 10:30 a.m. at the Bethesda Mennonite Church. Visitation will be from 1-9 p.m., Friday with the family greeting friends from 6-8 p.m., at the mortuary in Henderson. Memorials may be directed to the MCC Meat Canner or Bethesda Radio Fund. ​