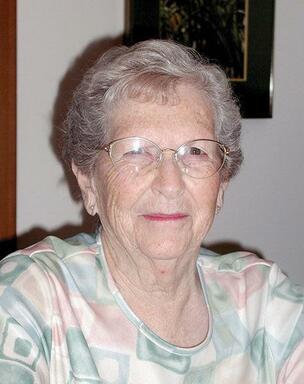 She was born Sept. 27, 1926 in Gresham to Pearl P. Spalding and Mary E. Jones. On June 8, 1947 Esther married Laurence Allen at the Wayland Church north-west of Gresham.

Esther was a singer and soloist in high school, recalling one highlight, singing at Josyln Memorial. Following high school she taught at District 22 Granger School in York County. Esther met Laurence during her time there. Her teaching skills then extended into homemaking. She was a 4-H leader, teaching her daughters sewing, cooking and other skills.

She was a seamstress who sewed many doll clothes at Christmas time to help make a little extra money, and sewed fancy dresses for her girls until they learned to make their own.

Esther was a nurse aid at York General Hospital for nearly 20 years, and trained other aids. She fought depression much of her life, and made it a lifelong campaign to help others with similar struggles. She received training to start a Recovery Incorporated group in York who sought support in making their mental health a business and not a game.

Esther “adopted” a young man when he needed someone to show him God’s love. He sent her a Christmas card this year saying, “Thank you for being my Grandma, and for introducing me to LOVE.” That is what she did, all of her life: introduce people to her God who IS LOVE.

She was one who lived love in every lesson she taught, every stitch she sewed, every patient she touched, and every person she met.

Esther was a member of the First Presbyterian Church in York where she served as an ordained Deacon and Elder. She taught the Bible to all ages throughout her life.

She was preceded in death by their daughter, Leslie Elizabeth; parents; brothers, George Rolon and Gerald Laurence.

Memorial Services are scheduled for 10 a.m., Feb. 16, 2017 at The First Presbyterian Church in York with the Rev. Dr. Mike Eickhoff officiating. Private family interment will precede services. Memorials may be directed to the family for later designation.   ​