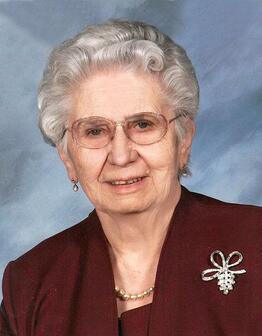 She worked for different grocery stores a few years after they moved to town. Later, she worked for Dells Café for 15 years. She was baptized in Bethesda Mennonite Church on June 13, 1943 by Rev A. W. Friesen

Estalean enjoyed working out in the field, and later babysitting for grandchildren. She also enjoyed doing things for her grandchildren, whether it be cooking, baking, taking them fishing or playing games with them.

She was preceded in death by her parents; husband; two sisters and their spouses and one brother and his spouse.

Graveside services will be held at 1:45 p.m. on Wednesday, Aug. 26, 2015 at Bethesda Cemetery in Henderson. Memorial services will be at 2:30 p.m. on Wednesday, Aug. 26, 2015 at Bethesda Mennonite Church in Henderson. Visitation will be held on Monday from 5 – 9 p.m. and Tuesday from 9 a.m. – 9 p.m., with family greeting family and friends from 6 – 8 p.m. Tuesday evening at the mortuary in Henderson. Memorials may be directed to Henderson Health Care Services or Bethesda Mennonite Church. ​