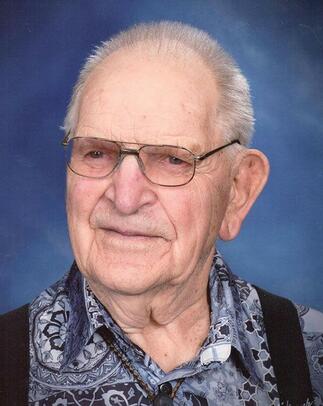 He was born on Sept. 22, 1922 to Emil and Emma (Wiemer) Brackhan at their home on the York/Seward County Line by the Beaver Creek. He was baptized and confirmed at St. John Lutheran Church, south of Waco.

He graduated from the Lutheran Parochial School south of Waco in the eighth grade then worked on the family farm with his father. He also fished and trapped, selling the hides. He started his own farming operation in 1945 while also working at the bin sites at York, Waco, Bradshaw, Benedict, McCool and Lushton. In April, 1957 the York Packing Plant began and he worked there from the day it opened until the day it closed in February, 1986.

Ernest was married to Alberta Lucile Junge at Zion Lutheran Church in Thayer on April 27, 1947. The Lord blessed them with 65 years and four months of married life and together they raised six children while living in York County the entire time. They found such joy together, fishing, bowling, playing cards and loving their family. In December, 2006, Alberta moved to the York General Hearthstone where Ernest visited her faithfully every day. Alberta went home to heaven Aug. 30, 2012.

Funeral services will be held at 10 a.m. Friday, Sept. 2, 2016 at Emmanuel Lutheran Church in York.  Following the funeral service lunch will be served at the church with interment following at 1 p.m. at St. John Cemetery, south of Waco. Visitation will be from 1-9 p.m. Wednesday and from 9 a.m. – 9 p.m. Thursday at the mortuary with the family greeting friends Thursday evening from 6-8 p.m.