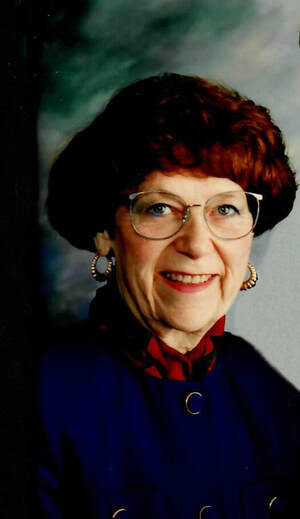 On October 4, 1925, Ermalee Ferguson Scroggin was born on a farm west of Oak, NE to Ernest L. and Glada (Schafer) Ferguson. She died March 22, 2019 at York, NE at the age of 93. Ermalee had four sisters and one brother. She attended the Carlon country school through the 8th grade and graduated from Nelson High School in 1942. She taught school at Sedan, NE  for 3 years and the school at Oak for 2 years.

On May 20, 1945, Ermalee married Bruce A. Scroggin of Oak, where they celebrated 55 years of marriage prior to his death in 1999. They lived on the Scroggin farm south of Oak and had three daughters: LeAnn (Duane) Egle of Gretna, NE, LaRee (Steve) Eckman of York, and Lynae (John) Stafford of Lafayette, IN.

Ermalee was baptized into Christ when she was a teenager and lived a life of service in the church and community. She worshipped  with the church of Christ in Nelson and Davenport. Some of her community service included volunteering for the Good Samaritan Home in Nelson, the Oak Oregon Trail Celebrations and numerous charitable events.

Many of Ermalee’s activities involved children. She felt working with kids was an investment in the future. She was a 4-H leader for over 40 years. She taught Sunday school and was involved in Y-Teens and the PTA. She always made sure young people could attend Bible classes and summer church camps. She received several  awards and honors for her service. In 1989 Bruce and Ermalee received the “Christian Parents of the Year” award from York College. She served on the board of the York College Helping Hands for many years.

Ermalee was creative and artistic. She loved cooking with a flair for family and friends. She enjoyed quilting, crocheting and decorating her home. She was most recognized for baking and decorating hundreds of beautiful cakes for birthdays, weddings and anniversaries. Bruce and Ermalee enjoyed going to South Padre Island, TX, in the winter for over 25 years, where they made many friends from other states. She continued to go south for many years after Bruce died.

Ermalee was preceded in death by her parents, Ernest L. and Glada Shafer Ferguson, her brother Dale Ferguson, her sisters, Alice Ferguson  Thayer, Wilma Ferguson Karraker and Carolyn Ferguson Heath, as well as her husband, Bruce A. Scroggin.

She is survived by her sister Shirley Marley, of Highland, CA, and daughters and sons-in-law as well as her seven grandchildren: Amy Egle Jaekel and husband Chris of Gretna, NE,  Cheri  Egle Phillips and husband Bryan of Topeka, KS, Jarred Eckman and wife Cara of San Antonio, TX, Jeremy Eckman and wife Micah of Houston, TX, Benjamin Stafford and wife Miriam of Spring Dale, ARK,  Joshua Stafford and fiancé Sarah Hardcastle of Waukeshia, WI and Rachel Stafford of Layfatte, IN. She also leaves 13 great grandchildren, several nieces, nephews and a host of friends.

Graveside services are scheduled for 2:00 p.m., Saturday, March 30, 2019 at the Oak Grove Cemetery in Oak to be followed by memorial services at 3:00 p.m., at the Davenport Church of Christ in Davenport. Visitation will be from 5-8:00 pm Friday with her family greeting friends that evening from 5-7:30 pm at the mortuary in York. Memorials may be directed to York College.