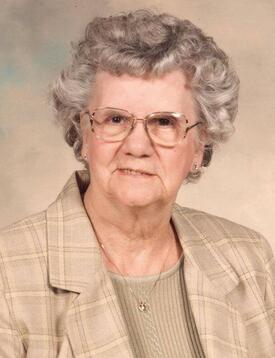 Erma was born April 1, 1920 in York County, near Waco, the fifth of nine children born to Carl and Louise (Snyder) Barth. She graduated from York High School. Erma married Loren Pieper on Aug.12, 1941, and they were the parents of three children: L. Allen, Linda, and Jane.

Erma and Loren settled in York in 1946 following completion of his World War II military service and were active members of the York community for many years. They founded a plumbing and well drilling business, Pieper Water Service in 1948, which they operated until 1965.

Erma was an active member of Emmanuel Lutheran Church for many years. She enjoyed working in the family’s business, as well as being a homemaker. In their retirement years, Erma and Loren enjoyed travel.  They visited all 48 of the contiguous US states, as well as making several trips to The Netherlands. In her leisure time, Erma enjoyed needlework, crossword puzzles, and watching football and baseball.

Erma had resided at the Fairview manor in Fairmont since 2007.

Funeral services will be held at 2 p.m. Tuesday, Sept. 8, 2015 at Emmanuel Lutheran Church in York. Interment will follow in York’s Greenwood Cemetery. Visitation will be from 1-9 p.m. Sunday with the family greeting friends that afternoon from 3-5 p.m. Memorials may be directed to Greenwood Cemetery or Fairview Manor.​