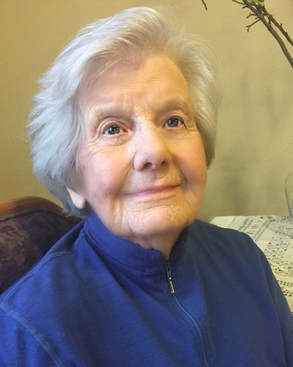 Elsie Florentina Schlechte was born on January 5, 1922 south of Waco to Ludwig Carl Blum and Mathilda Otilla Schlueter, and passed on to glory July 18, 2018 at York General Hospital at the age of 96 years, 6 months and 13 days. Elsie was baptized on January 29, 1922 and confirmed on April 14, 1935 at St. John’s Lutheran Church, Waco, Nebraska. She was a member of St. Paul Lutheran Church, Utica, Nebraska.

On September 3, 1944 Elsie was united into marriage to Melvin Henry Schlechte at St. John’s Lutheran Church, Waco, Nebraska. To this union three children were born. Elsie lived on the same farm for 71 years (1944 to 2015) and moved to York General Hearthstone, York, Nebraska in the fall of 2015.

Elsie stayed engaged in her farm operation post physical limitations keeping up to date with changing farm practices and technology. She loved experiencing the beauty of God’s creation through nature with a sense of wonder, a twinkle in her eye, a song in her voice. She was always asking questions, problem solving, and discovering.  Most importantly, she had gratitude for the life she was given.

Funeral services are scheduled for 10:00 am, Monday, July 23, 2018 at St. Paul Lutheran Church in Utica with the Reverends Jon Dunbar and Richard Gudgel officiating. Burial will follow at the Waco Cemetery. Visitation will be from 1-8 pm, Sunday with her family greeting friends from 4-6 pm at the mortuary in York. Memorials may be directed to St. Paul Lutheran Church or School, Orphan Grain Train, or to Lutheran Hour Ministries.