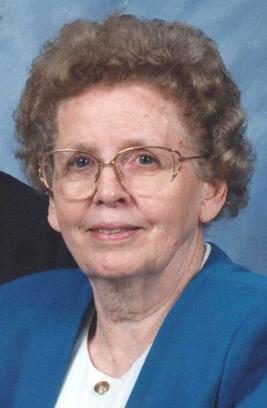 On June 9, 1946, upon her confession of faith, she was baptized into Bethesda Mennonite Church and remained a faithful member. Her favorite Bible verse was Romans 5:8 “But God commendeth His love toward us in that we were still sinners Christ died for us.”

On Jan. 23, 1948 she was united in marriage to Jacob E. Friesen. They were privileged with 54 years of marriage. God blessed them with two children, Donovan and Diane.

Jacob and Elsie worked together and enjoyed farming and raising their children. Elsie loved to cook and was a cook at the Dutch Kitchen and later cooked at the hospital and took continuing education classes to become a dietary manager, a position she was proud of. In their “retirement” both Jake and Elsie enjoyed working at York College and made many lasting friendships.

Another joy in Elsie’s life were her grandchildren and great-grandchildren. She always made time for them, attending programs, graduations and weddings. Elsie prayed for them daily.

Jacob passed away Aug. 6, 2002 and Elsie managed with God’s help on her own, until two months ago when illness weakened her body, but never her spirit and love for God.

Preceding her in death are her parents; husband, Jacob; two brothers in infancy; brothers and wives, Ivan and Helen and Alfred and Jeannette Regier; sisters, Matilda and Edwin O’Toole and Marie Regier. She was also preceded in death by her in-laws, Adolph and Goldie Friesen, Bertha and David Penner, Arlie Friesen, Clarence and Gladys Friesen and Pauline and Howard Friesen.

Surviving to cherish her memory are her children Donovan and Sherryl Friesen of Freeman, S.D. and Diane and Mike Harrison of Henderson; grandchildren include, Denise and Eric Friesen of Norfolk, TJ and Laura Harrison of  Sioux City, Iowa and Dawn and Joe Muhs of Omaha. Also very dear to her were her great-grandchildren, Bruce and Jacob Harrison, Piper, Colin and Holly Muhs. Also surviving are her brother Pete and Eleanor Regier, Lavina and David Quiring and sister-in-law Elsie Epp. She had many nieces and nephews who were very close to her as well.

Graveside services will be held at 10:15 a.m. Tuesday, Dec. 30, 2014 at Bethesda Cemetery in Henderson.  Memorial services will follow at 11 a.m. at Bethesda Mennonite Church. Visitation will be Sunday from 2-9 p.m. and Monday from 9 a.m. - 9 p.m. at Metz Mortuary in Henderson. The family will be present to greet friends Monday evening from 7 - 8:30 p.m.  Memorials may be directed to the church.​​