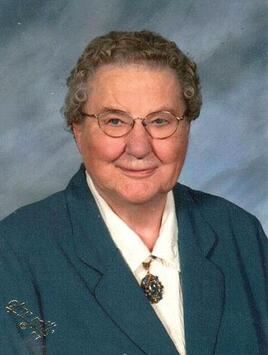 She was born to Henry P. and Mary (Klassen) Huebert, on Sept. 4, 1924 in their rural farm home five miles northwest of Henderson.

Upon her confession of faith in Jesus Christ, Elsie was baptized by Rev. A. W. Friesen on Dec. 27, 1942. As a member of the Bethesda Mennonite Church she was active in several organizations and served on numerous committees and boards as time would permit.

Elsie received her elementary education in Districts #38 and #33 in Hamilton County. After graduation from Henderson High School in 1942, she attended York College for one year.

During the next 24 years she continued to enroll in both on-campus and off-campus courses. She accumulated enough credits to graduate from the University of Nebraska during the summer session of 1965. In the meantime, she taught in rural schools for six years and in the newly consolidated Henderson Community School for 12 years.

In the afternoon of Nov. 30, 1952, Elsie and Arlie E. Friesen exchanged marriage vows with Rev. Arnold Nickel officiating. Their temporary home was made in Henderson until her home place was available. After 20 years of farming, Arlie’s health continued to decline which prompted them to build a new house in Henderson in 1976. Arlie passed away on April 17, 1979.

officiating. The couple became involved with the Retired Senior Volunteer Program in Aurora and also spent many hours pursuing their hobbies. Willard passed away on April 21, 1997.

Elsie became involved with the genealogy committee while planning for the Mennonite Centennial in 1974. In the years which followed she was motivated to compile six genealogies in which more than 23,000 descendants are listed. While residing in assisted living at Rosewood Court, Elsie constructed buildings to scale of her home place. She then constructed buildings of her farm as they were when she and Arlie moved to Henderson.

Surviving are three step-children and their families, Ken and Lavera Regier, Larry and Lorna Epp and Ralph and Delilah Jane Ross; nieces and nephews. Preceding her in death were her parents; both husbands and sister and brother-in-law, Clara and Dan P. Thieszen.