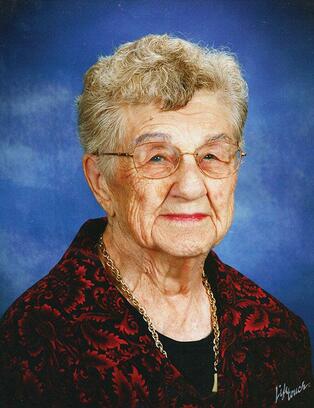 She was born Aug. 13, 1927 at Utica to Carl and Ann (Fehlhafer) Pozehl and was a 1945 graduate of Seward High School. A longtime member of Emmanuel Lutheran Church in York, she was a member of the Lutheran Ladies Aide and sang in the church choir. Elnora was a farm wife and mother to six children. On April 21, 1946 she was married to Edgar H. Alms at Emmanuel Lutheran Church, York.

She is survived by four daughters, Jane (John) Seigel of McCool Jct., Elaine Flowerday of Ashland, Judy (Bob) Proehl of Marietta, Ga. and Barbara (Jim) Fehringer of McCool Jct.; two sons, Wayne (Mary) Alms of Walnut Grove, Minn. and Randy Alms of York; ten grandchildren and seventeen great-grandchildren. Also surviving are two sisters, Esther Gaver of York and Aloha Battreall of North Platte; five sisters-in-law; five brothers-in-law and numerous nieces and nephews.
She was preceded in death by her husband Edgar; grandson, Justin Proehl; parents; her sister, Amanda Noble; eight brothers-in-law; parents-in-law and four sisters-in-law.
​
Funeral services are scheduled for 1 p.m. Friday, Oct. 2, 2015 at Emmanuel Lutheran Church in York with the Reverend Mike Neidow officiating. Burial will follow in York’s Greenwood Cemetery. Memorials may be directed to Emmanuel Lutheran Church. Visitation will be 1-9 p.m. on Wednesday and from 9 a.m. – 9 p.m. on Thursday at the mortuary.