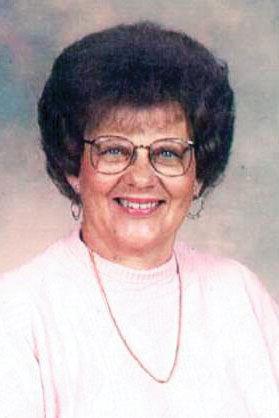 She was born Sept. 21, 1934 in York to Walter and Gertrude (Pliefke) Heiden. She attended country school and later graduated from York High School in 1951 at the age of 16. She was confirmed at Emmanuel Lutheran Church, York. On Feb. 22, 1952 she was united in marriage to Donald Mason at Emmanuel Lutheran Church and to this union five children were born: Diane, Rebecca, Nancy, Jon and Tom.

Eldene was a homemaker, but held numerous jobs as well. She worked in the York County Fair Office for 50 years, worked at Pump N Pantry for 12 years, and drove for R & A for 7 years. She loved spending time with her family, especially her grandchildren and great-grandchildren. She loved playing piano and playing 10 pt. pitch with her card clubs.

She is also survived by her brother, Robert (Bonnie) Heiden of York and sister, Darlene (Richard) Holm of Overland Park, Kan.

She was preceded in death by her parents and her father and mother-in-law, Clarence and Marie Mason.

Memorial services are scheduled for 10 a.m., Thursday, April 20, 2017 at Emmanuel Lutheran Church in York with the Reverend Ben Kaiser officiating. Inurnment will be in Greenwood Cemetery, York. Eldene has been cremated. No viewing or visitation. Memorials may be directed to the church.​