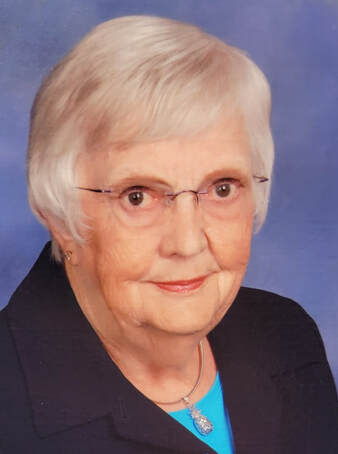 Elaine M Dahlgren, age 96 of York, NE died Saturday, March 12, 2022 at York. She was born November 4, 1925 in Grand Island, NE to William and Vivi (Emanuelson) Nielsen. Elaine was longtime member of the First Presbyterian Church in York, where she served as an Elder, Deacon, and taught Sunday School for many years. She was past President of the American VFW Auxiliaries, the York General Hospital Auxiliary, was a 50-year member of the Order of the Eastern Star PEO Chapter A. She was also York’s first Yorkfest Queen. She enjoyed all things Husker sports related and loved all animals especially dogs. Elaine was previously employed by the City of York as the Senior Citizen Coordinator at the York Community Center.

Funeral services will be held a 10:00 am, Saturday, March 19, 2022  at the First Presbyterian Church in York with the Reverend Dr. Michael Eickhoff officiating. Burial will follow at Greenwood Cemetery in York. Visitation will be from 1:00- 8:00 pm Friday with her family greeting friends from 6:00-7:30 at the mortuary in York. Memorials may be directed to the First Presbyterian Church in York.