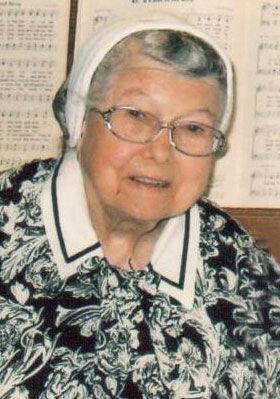 She attended grade school in school district 113, Dawson County, Mont.  Upon her confession of faith Edna was baptized Oct. 15, 1939 and became a member of Bethlehem Mennonite Church in Bloomfield, Mont. Edna graduated from Grace Bible Institute in 1947.

Following graduation Edna and Maria Thieszen worked together as missionaries in Oklahoma for 15 years with the “Go Ye Mission.” When Maria’s mother died she and Maria lived with Maria’s father in Henderson for 10 years. During that time they were involved in children’s ministry, conducting after school Bible classes, teaching vacation

Bible School and helping at several different Bible camps during the summer. For 18 summers they were managers of the Storytime Bus, a 42 passenger bus which was their mobile home as they went to swimming pools and county fairs to give the Word of God to boys and girls.

They moved to the Good Samaritan Village in Hastings in 1979 where Edna worked in the nursing home for 22 years, 14 of those years in the dietary department and 8 years in the laundry. After retirement she was involved in volunteer work in the village. In October 2014 Edna moved to Henderson Healthcare. While there, she enjoyed the Bible studies and other programs. She also appreciated the care of the staff at the home.

Edna is survived by her brother, Paul Schultz and his wife, Myrtle of Richey, Mont.; sister-in-law, Frances Schultz of Oklahoma City, Okla. and her nieces and nephews. She was preceded in death by her parents; Maria Thieszen; nine brothers and a sister.

Funeral services will be held at 11 a.m. on Thursday, Feb. 18, 2016 at Faith Evangelical Bible Church in Henderson. Private graveside service. Visitation will be Wednesday evening from 3-8 p.m. at Metz Mortuary in Henderson. Memorials may be directed to Henderson Health Care Services.​
Condolences may be emailed to Metz Mortuary Messages will be given to the family.