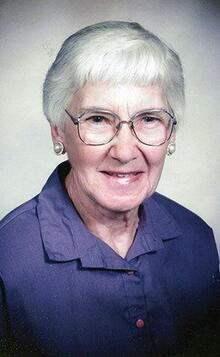 Ardell Otte, age 99, of Omaha, formerly of York County, passed away on Wednesday, June 7, 2017. Ardell was born on Nov. 26, 1917 in York, the first child of Fredrick O. and Edith (Larson) Sandall. After graduation from York High School in 1935, Ardell taught in a one room school near Bradshaw.

On March 15, 1941 she married Ted J. Otte in Polk and they settled on the family farm. Ardell was a farm wife and mother. She worked for a period of time at Dell’s Restaurant in Henderson and then for Production Credit Association in York and then in Lincoln, until her retirement in 1982. Ardell and Ted moved back to the family farm in 1983 where they resided until they sold the farm in 2000. They lived in York for several years before moving to Omaha in 2008.

Ardell was a long time member of the First Baptist Church of Polk. She was active as a 4-H Leader in York County, guiding all five of her children through the program. Ardell was an avid reader, and greatly enjoyed crossword puzzles. She enjoyed bird watching, gardening, sewing and cooking. She and Ted enjoyed traveling and visiting their children, grandchildren and great grandchildren.

She was preceded in death by her husband of 70 years, Ted; brother, Charles; sister, Verda; daughter-in-law, Helen and great-granddaughter, Lilyanah.

Survivors include sister, Carol Livengood of Brush, Colo.; brother, Ralph and wife Marcia Sandall of Dallas, Texas; two daughters, Edith Gravenmier of Redding, Calif. and Ann Wilson of Council Bluffs, Iowa; three sons, Fred and wife Gina of Omaha, Eric and wife Nancy of Wichita, Kan. and Charles “Chuck” and wife Jaye of Junction City, Kan.; eight grandchildren and 16 great-grandchildren, as well as many nieces and nephews.
​
Memorial services will be held 10 a.m., Tuesday, Aug. 8, 2017 at the Metz Chapel in York. Inurnment will be in the Arborville Cemetery near Polk with memorials being directed to the Lydia House, 2809 N 20th St., Omaha, NE 68110 or to the Geary County 4-H Foundation, PO Box 28, Junction City, KS 66441. No viewing or visitation however her family would like to greet friends Monday evening from 6 – 8 p.m. at the mortuary.