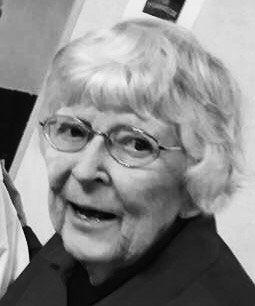 Midge was born Feb. 13, 1924 to Myrtle and Everett Smith in Edgewood, Iowa and graduated from Edgewood High School. For the next three years she worked as assistant postmaster in her hometown. She then attended Coe College in Cedar Rapids, Iowa and then received her BA degree in economics from the University of Iowa. Midge enjoyed a semester studying at Oxford College in England. She did not intend to be a teacher but a job opening at an Indian Reservation in South Dakota came up and ended up steering the rest of her career in the direction of education. She later married Herbert Redfern.

To this union were born four children: Debbie, Jane, Nikki and Barry. She later received her masters and doctorate degrees from the University of Nebraska. Midge was active in many educational organizations. Her experience in education included classroom teaching, being a principal and counseling. She taught in Hampton, McCool Junction and for 22 years was a counselor at Irving Jr High in Lincoln prior to her retirement.

Midge was an avid golfer and especially enjoyed Husker football, basketball and volleyball. She had 2 holes-in-one at the York Country Club where she served as the only female Board president. Midge taught Sunday school and was a Girl Scout leader. She treasured family days when all the children and grandchildren were gathered at her home. She also enjoyed Thursdays when she would play Dummy Rummy with her special friends at YCC in the afternoon and then on to MOM night. She was also active in the Yorkshire Playhouse where she acted in six plays. She loved her dogs and cats over the years, all of which came from the York Adopt-A-Pet, with Frankie the Papillion being her latest. Midge will always be remembered for having a wonderful sense of humor.

Funeral services are scheduled for 2 p.m., Friday, March 17, 2017 at the First United Methodist Church in York with the Reverend Art Phillips officiating. Burial will be held in York’s Greenwood Cemetery. Visitation will be held from 1-8 p.m. Thursday and one hour prior to services at the church. Memorials may be directed to the York Adopt-A-Pet or to the church. ​