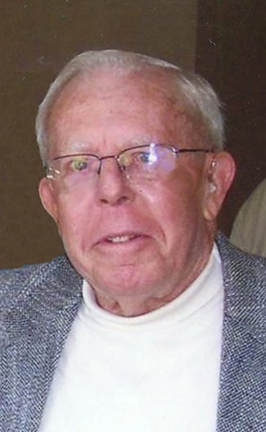 Dr. James (Jim) Edward Stansberry, age 92, of York, NE, passed away Friday, August 24, 2018 at York. He was born August 18, 1926 in Norfolk, NE to Homer and Lena (Kelly) Stansberry. On December 20, 1953 he was married to Lorraine Meyer in Wayne, NE. Jim served his country in the United States Navy during WWII in the Amphion Corp aboard a LCI ship. He was with the Peace Keeping Group in Okinawa at the end of the war.

Jim graduated from Norfolk High School, Norfolk Jr. College, and the Illinois College of Optometry in Chicago. He was later inducted into the Hall of Fame at Northeast Community College (formerly Norfolk Jr. College).Jim started his optometry practice in Norfolk, NE and moved to York in 1956 and opened York Vision Clinic. He owned and practiced at York Vision Clinic for over 40 years and retired in 1996. He was a member of the American Optometric Association and the Nebraska Optometric Association, serving as President, long time Secretary, and was Optometrist of the Year. He still retained a lifetime Optometry License.

He was very active in many organizations serving in various offices and receiving many awards including the Rotary Paul Harris Fellow, Senior Center member over 90 and Sertoma member for 50 years or more. The service organizations he was active in were:  York Elks Club, Masonic Lodge, Shriners, York Noon Sertoma, Toastmasters, Jaycees, York Legion Club, York VFW Bolton Post #19, and he served as Governor Tiemann campaign chairman. His church, First Presbyterian Church was very important to him as he served as an Elder, Deacon, on the Stewardship Committee, and was a longtime member of the Presbyterian Memorial Foundation Board. He was on the Senior Advisory Board for York County and Nebraska. The York Area Senior Center had a big part of his heart in it, he was the person instrumental in starting this vision and watching it grow until the facility was complete and he was so proud of how it has been growing and serving so many people. He was a longtime President of the Board and was officially made President Emeritus.

He was crowned Yorkfest King in 2000. He was honored to be a member of the Honor Flight with other WWII Veterans from Nebraska who went to Washington D.C.

He enjoyed fishing and fly-fishing at their home in Estes Park. It was a peaceful retreat for his family. He also enjoyed golfing, trains and spending time with his family, especially his only grandson. He was Benton’s biggest supporter and so proud of his accomplishments never missing an event to cheer him on. He was thrilled to be able to play on the Master’s Golf Course in Augusta with fellow optometrists who he had gone to school with. He didn’t get a green jacket but he had the experience of a lifetime.

Jim was a wonderful caring man, who made everyone else come first. He made everyone feel so special and will be missed very much. We will miss his singing, humming and whistling. He was the best Husband, Dad, Grandpa and Friend you could ever ask for. He always asked “Is there anything new?”, and “See you” or “Talk to you later”. Well Dad the thing that is new is you won’t be here with us, but you will always be there for us in spirit, and yes we will see and talk to you later. You were so very loved.

Funeral services are scheduled for 10:00 am, Thursday, August 30, 2018 at the First Presbyterian Church in York with the Reverend Dr. Michael Eickhoff officiating. Military Honors will be held at the church. Inurnment to be held at a later date in Norfolk, NE. Visitation will be held from 5-8 PM Tuesday and 9 AM – 8 PM on Wednesday, with the family greeting friends from 6-8 PM on Wednesday evening at the mortuary. Memorials may be directed to the York Area Senior Center, or to the First Presbyterian Church Memorial Foundation in York.