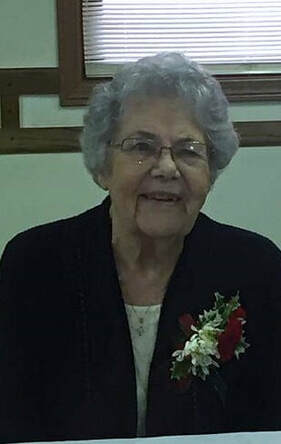 Dorothy Mae Nienhueser, age 91 of York, NE died Saturday, December 1, 2018 at York. She was born December 8, 1926 in rural Seward County, NE to Freeman and Martha (Pankoke) Graff and graduated from Goehner High School in 1944. On September 1, 1946, she was united in marriage to Erwin “Butch” Nienhueser at Emmanuel Lutheran Church in York.

Dorothy was a farm wife and also a cook at Benedict Public Schools and then an in home caregiver. She was a longtime member of Emmanuel Lutheran Church in York where she was a member of LWML and the Quilting Circle. Dorothy enjoyed playing cards and was a member of a card club for over 60 years. Dorothy also loved to sew and was especially good at quilting. She made sure everyone had something homemade. She enjoyed attending her children and grandchildren’s events and always remembered their birthdays. She liked to watch Husker sporting events and was known to get quite excited during the football games.

She was preceded in death by her parents, husband, son Gary, brothers Robert, Lee and Darrell and grandson-in-law Curtis Johnson.

Funeral services are scheduled for 10:00 a.m., Wednesday, December 5, 2018 at Emmanuel Lutheran Church in York with the Reverends Mike Neidow and Ben Kaiser officiating.  Burial will be in York’s Greenwood Cemetery. Visitation will be from 4-8:00 p.m., Monday and then all day Tuesday with her family greeting friends from 6-7:30 p.m., later that evening at the mortuary. Memorials may be directed to her family for later designation.