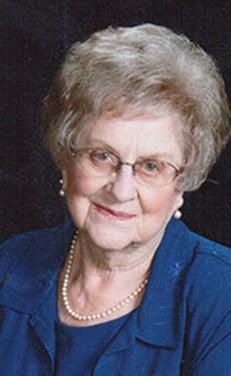 Dorothy Louise Gocke, age 94, of York, died Saturday, Aug. 12, 2017 in York.
She was born Aug. 7, 1923 in York to Hugo and Florentine (Schlueter) Naber and was baptized on Sept. 2, 1923 by Pastor F. Wunderlich at St. John’s Lutheran Church in Waco. She attended the St. John’s North School taught by F.A. Kiehaefer and was confirmed on March 21, 1937 by Pastor George Koslowski. She was a life-long member of St. John’s where she enjoyed being part of the Ladies Aid and choir. Dorothy graduated from Utica High School in 1941 where as a junior she was chosen to attend Girls State an experience she treasured.

On Aug. 5, 1945 she was married to SSgt. Arlin G. Gocke while he was home on furlough after serving 11 months in the European Theater during WW II. After Arlin’s discharge they farmed at Waco until July 1, 1973 when they moved to Utica.
Dorothy was a homemaker and worked as a restaurant cashier, hostess and manager for many years. She enjoyed quilting, crocheting, and embroidery. She also enjoyed being a Senior Reading Pal at Centennial Elementary School, bowling, and was a member of the American Legion Auxiliary.

She is survived by her children, Douglas (Sandra) Gocke of Waco, Cheryl (Richard) Steever of York and Deon (Becky) Gocke of Waco. Her grandchildren include Jeff (Jill) Gocke of York, Jane (Peter) Walter of Ovid, Colo., Nathan (Marjorie) Steever of York, Valerie (Joel) Dorfmeyer of Lincoln, Brooke (Jeremy) Cast of Ansley and Austin (Courtney) Gocke of Lincoln. Her great-grandchildren include Cameron (Cheyanne) Gocke of York, Adrienne Gocke of York, Trey, Ethan, Whitney Walter of Ovid, Colo., Maxwell and Samuel Dorfmeyer of Lincoln and Payton, Avery and Preston Cast of Ansley. One great-great-grandchild, Kendall Gocke of Waco, along with several nephews, nieces, many other family members and special friend Hubert Gloystein.

She was preceded in death by her parents; husband; brothers and sisters-in-law, Rupert and Bernice, Harlan and Mildred Naber.
​
Funeral services are scheduled for 2 p.m., Wednesday, Aug. 16, 2017 at St. John Lutheran Church, Waco with the Reverend Matthew Mau officiating. Burial will be in the church cemetery. Visitation begins 1-8 p.m. Tuesday, Aug. 15, 2017 with her family greeting friends from 6:30-8 p.m. at the mortuary. Memorials may be directed to the family for later designation, or to the donor’s choice.