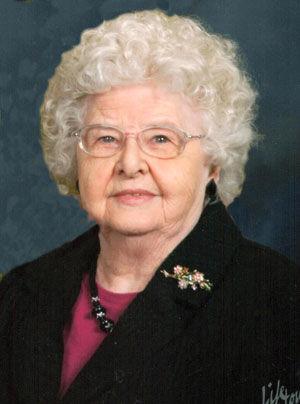 Dorothy Mae (Gustafson) Bergesen, age 92 of York, went to her Heavenly home on Thursday, March 31, 2016 at the Hearthstone in York.

She was born March 30, 1924 in Bessemer, Mich. to Oscar and Anna (Johnson) Gustafson. Dorothy married Reverend Monrad Bergesen on July 23, 1949. They had two children, Norstad Bergesen and Sonja (JayDee) Scamehorn both of York. Dorothy was a wonderful wife, mother and servant to her Lord.

Besides her children, Dorothy is survived by two sisters, Lorraine (Irving) Booth of Eagle River, Wis. and Carol Ann Johnson of Loup City and many nieces and nephews.

She was preceded in death by her parents; husband; sisters and brothers-in-law, Alice and Ivan Olsen, and Marion and Eldon Sandin; brothers and sisters-in-law, Everett and Catherine Gustafson, Clifford and Ruth Gustafson, Oliver and Frieda Gustafson; and brother-in-law, Carl Johnson.

Funeral services will be held at 1:30 p.m. Tuesday, April 5, 2016 at the Metz Chapel in York with Pastor Brad Johnson officiating. Dorothy will be buried in the Evergreen Cemetery, Everett, Wash. The family will greet friends prior to the service from 11 a.m. -1 p.m. Memorials may be directed to the family for later designation.  ​