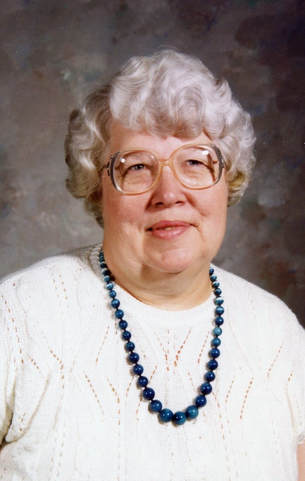 Doris M. Dahlke age 87 of York, NE, formerly of Central City, NE, died Monday, September 17, 2018 at York. She was born December 28, 1930 at Ponca, NE to Harold and Blanche (Olson) Vance. She was a 1949 graduate of Pawnee City High School. After graduating from the University of Nebraska at Lincoln, she taught home economics at Stromsburg for two years  and Marquette Public Schools for 27 years. On December 27, 1953 she was married to James Dahlke at the United Methodist Church in Fairbury, NE. She was a member of Emmanuel Lutheran Church in York and formerly a member of St Paul Lutheran Church in Central City, NE where she was active in the LWML and other church committees.  She was a member of the American Legion Auxiliary Unit 6 in Central City serving as president and vice president. She was also a member of the 40 & 8 Club Nebraska #136. An avid cook, she enjoyed hosting parties, playing bridge and was very involved in her church groups.  When her daughter Deborah was in Girl Scouts, Doris was a Girl Scout Leader and each year boxes of Girl Scout cookies would stack up in Doris’ dining room awaiting the Girl Scouts to distribute them.  Doris was very proud of her FHA students who held many district and state positions. Camping, boating, skiing and fishing were also fun hobbies she enjoyed but most of all, she loved being with her children and grandchildren.

She is survived by her daughter Deborah Dahlke of York and her son David (Cynthia) Dahlke of Edmond, OK. Her grandchildren include Christopher (Carrie) Dahlke and Rachel (Justin) Kathman, all of Topeka, KS. Also surviving is her nephew Paul (Natalya) Steinke of Gardner, KS, and her sister-in-law Nora Mae Vance and her daughters Alicia (Jason Fuemmeier) Vance Aguiar and Allison Vance, all of Cedar Rapids, IA, niece Julie Vance and nephew Doug Vance, both of Milwaukee, WI, and niece Ann (Greg) Butler of Eureka, KS, nephew Jay (Dee) Sawyer of Holdrege, NE, and nephew Bob (Candy) Sawyer of Las Vegas, NV.

She was preceded in death by her parents, husband, sister and brother-in-law Thelma (Tom) Sawyer, brothers William Vance and Alvin Vance and her nephew David Vance.

Funeral services are scheduled for 10:00 a.m., Saturday, September 22, 2018 at Emmanuel Lutheran Church in York with the Reverend Mike Neidow officiating. Burial will be in York’s Greenwood Cemetery with memorials being directed to her family for later designation. Visitation will be from 4:00-8:00 p.m., Thursday and Friday 9:00 a.m. – 8:00 p.m., with her family greeting friends from 6:00 p.m. – 8:00 p.m. that same evening at the mortuary.