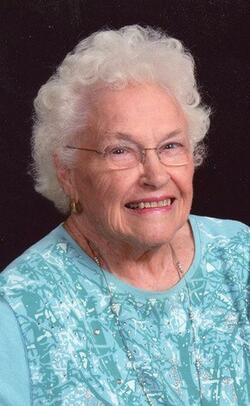 Doris received her secondary education from Loup City High School and got an Associate degree from the University of Nebraska. She held several jobs in Ravenna and York including; the Community/Senior Center in Ravenna and York Jewelry in York. Doris was a member of the First United Methodist Church in York. She loved to socialize, and was an active PEO member, had been in Extension Club and Red Hats, was a member of Garden Club, attended Mary Circle of United Methodist Women, and played in several bridge clubs.

Doris and Hervey raised their three sons in Ravenna. One of Doris’s favorite activities was going to their cabin at Johnson Lake and spending time with family and friends. In York, she was entertained by sitting on her front porch visiting with the neighbors and seeing her grandchildren and great-grandsons.

She was preceded in death by her parents; her loving husband of 65 years, Hervey; brother, Darrel and sisters June and Della.
​
Memorial services are scheduled for 10:30 a.m. Thursday, Oct.12, 2017 at First United Methodist Church in York with the Reverend Art Phillips officiating. Graveside services will be held 1:30 p.m. at Greenwood Cemetery, York. Cremation. No viewing or visitation. Memorials may be given to the First United Methodist Church, the York Senior Center, or to the family.
Condolences may be emailed to Metz Mortuary Messages will be given to the family.
Find our featured Mortuary in Family Services, Funeral Services and Grievance Services featured as a York, Nebraska Business in York Marketplace.
Location: Metz Mortuary | 109 South Lincoln Ave | York, Nebraska 68467 | Phone: 402-362-3351