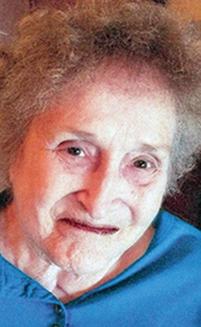 Doris Rae Foote, age 78, of Adams, died Tuesday, Dec. 5, 2017 at Adams.
She was born April 27, 1939 in Exeter to Elmer and Mae Ellen (Pinneo) Williamsen. She was married to Bruce Foote in York.
Doris was a member of the Eagles Auxiliary in York, loved sewing especially bridesmaid’s dresses throughout the years. She enjoyed knitting, crocheting and visiting with her friends in the “Hen’s House” as the residents called her room in Adams. She loved playing cards, eating mints and being with her family and grandchildren. Doris was a member of the Navy Mother’s Club and was president of the Resident Council at the Gold Crest Retirement Home in Adams.

​Doris is survived by her daughter, Robin (Dale) Dowling of Douglas; son, Brian Foote of Nebraska City and granddaughter, Misty Foote of Schuyler. Her other grandchildren include Andrew, Felicia, Clay, Jonathan, John, Sidney, Mae, Kiley, Hailey, Brandy, Shawn and Kris, along with 13 great-grandchildren. Doris is also survived by her sister, Nancy (Marlan) Cohagan of McCool Jct.; brothers, Ardell (Jane) Williamsen of Pasadena, Md. and William Williamsen of York and sister, Sharon (Rick) Wells of Michigan.
She was preceded in death by her parents; husband; sons, Doug and Jerry and her daughter Cindy. Sisters, Merna, JoAnn and Betty and brothers Merrill and Kenneth.
Funeral services are scheduled for 10 a.m. on Saturday, Dec. 9, 2017 at the Metz Chapel in York with the Reverend Nathan Metzger officiating. Interment will follow in the Pleasant Hill Cemetery west of Benedict. Visitation is from 1-8 p.m., Friday with her family greeting friends from 6-8 p.m., that same evening at the mortuary. Memorials may be directed to the family for later designation.
Metz Mortuary, York is handling arrangements