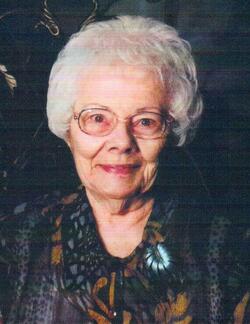 She married Cleo James Campbell on May 9, 1950 at Shiloh Church, a country church located southwest of Benedict. To this union was born a son, Randy James Campbell and a daughter Becky Jean Campbell, who was stillborn. Cleo, preceded her in death on Oct. 11, 1971. Doris passed from this life on Friday, Aug. 14, 2015.

Doris grew up during the great depression and attended the Benedict Consolidated School, graduating from high school in May of 1940. She was a member of the Shiloh United Brethren Church, later transferring her membership to the York Evangelical United Brethren Church. She taught a Sunday School class for 25 years, sang in the church choir and took an active part in the church circle.

In 2004, Doris’s son Randy asked her to come live in his home. He remodeled the main floor and it became her home with Randy relocating to his finished basement. Together the two of them raised hundreds of flowers having a true floral showplace. They had 150 different named hybrid daylilies along with multitudes of other kinds of flowers. Doris loved flowers, blooming shrubs, trees, birds and anything that had to do with nature. She had eleven bird feeders in her backyard and would have as high as 200 birds feeding at one time during the winter months. Doris and Randy also took several extended vacations traveling from the Rocky Mountains to the State of Maine.

In July of 2005 Randy became critically ill and Doris would drive 120 miles every other day for a period of eleven months to spend at least eight hours a day sitting in Randy’s hospital room continually encouraging him to fight to live. He always said that if it was not for her love, care and devotion he never would have survived.

She was preceded in death by her husband, Cleo James (Tank) Campbell; her infant daughter, Becky Jean Campbell along with her parents; sister, Ella Louise (Arthur) Allen and nephew Timothy Morris Allen.

Funeral services will be held at 2 p.m. on Wednesday, Aug. 19, 2015 at Metz Chapel.Burial will follow at Greenwood Cemetery in York. Visitation will be from 1 - 9 p.m. on Tuesday.Memorials may be directed to Greenwood Cemetery.​
Condolences may be emailed to Metz Mortuary Messages will be given to the family.