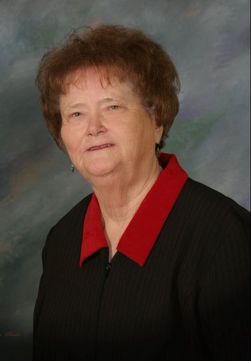 Donna Jean (Dixon) Peters was born April 10, 1932 in Hastings to John W and Venita L (McClure) Dixon and passed away on September 18, 2018 at the Hearthstone in York at the age of 86.  Her first home was in a sod house on a farm northeast of Alma, Nebraska, on land that her great grandfather homesteaded in 1873.  In May of 1940, she was baptized and confirmed at the Methodist Church in Alma.  That same year, she moved with her family to Phillipsburg, Kansas where she attended school through the 8th grade.  In the summer of 1945 the family moved to Aurora, Nebraska and she graduated from Aurora High School in 1949.  On August 28, 1949 she was married to John H Peters at the Methodist Church in Aurora.

They moved to York in May of 1950 and Donna worked for Nebraska Public Power (formerly Consumers Public Power) either part time or full time for almost 50 years.  She retired in 2000.  Following retirement, she volunteered at Blue Valley Community Action and drove Busy Wheels.

She was a lifelong member of the United Methodist Church, just recently receiving honors for being a 75 year member.  She was active in Deborah circle.  She belonged to Friendship club and enjoyed playing cards in various bridge and pitch groups.

One of Donna and John’s greatest hobbies was traveling.  They had been in all 50 states, several provinces of Canada and Mexico.  They also traveled to Israel, Egypt and Jordan, Australia, New Zealand, Figi Islands, China, Russia and to Europe many times.

She is survived by her daughters, Deb (Wes) Tonniges of McCool Junction, NE and Patti (Craig) Vincent of York, five grandchildren, Travis (Kelsi) Tonniges of Lincoln, Matt (Stacie) Tonniges of Glidden, IA, Dr. Scott (Shelby) Vincent of Omaha, Alissa (Daniel) Disney of Hays, KS and Caryn Vincent of Lincoln.  Seven great grandchildren, Caden Rainforth and Scarlett and Charley Tonniges of Lincoln, Hunter and Fischer Tonniges of Glidden, IA and Morgan and Nicholas Disney of Hays, KS.  She is also survived by brother-in-law and sisters-in-law Levi and Leanna Peters of Henderson, Elvera Peters of Freeman SD, and Cornelia Kliewer of Aurora, nieces, nephews and cousins.
She was preceded in death by her parents, her husband of 67 years, John, her brother and sister-in-law, Raymond and Ruth Dixon and an infant brother, Richard Dale Dixon.

Funeral services are scheduled for 10:00 a.m., Monday, September 24, 2018 at the First United Methodist Church in York with the Reverend Art Phillips officiating. Burial will be in York’s Greenwood Cemetery. Visitation will be from 1:00p.m. – 8:00 p.m., Sunday with her family greeting friends from 6:00 – 8:00 p.m., that same evening at the mortuary. Memorials may be directed to the First United Methodist Church Foundation or to Blue Valley Food Pantry in York.