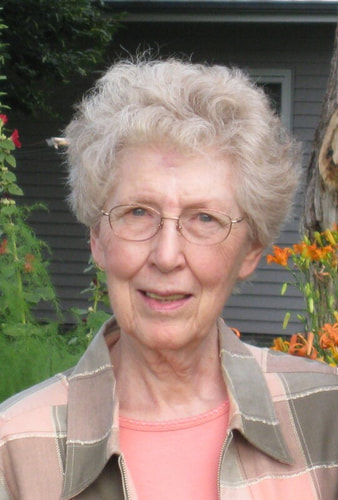 Auburn haired Donna grew up in the small towns of Hays Center, Wauneta, and Palisade Nebraska, where her parents owned and operated general stores.  During the Dirty Thirties, the sky would be red with smothering dust which tasted like bitter flour.  Without rain, crops did not grow. Her parents’ customers brought eggs or cream to the store to trade for sugar, flour, salt, and other things they needed.  In 1938, when Donna was ten, her brother, Kent was born.

Donna entered the University of Nebraska’s College of Business Administration in 1946.  “There were many WWII veterans entering college then.  In the accounting and the economics classes of seventy,  only two students were women – an ex-service woman and me.” Donna shifted her studies to the College of Home Economics, as “the Home Ec girls were having lots more fun.”  She graduated with a bachelor’s degree in Home Economics in 1951, with a later endorsement in Early Childhood Education.  Donna taught Home Economics, Kindergarten and 2nd grade in Ewing, David City, Ulysses, and Shelby;  before spending her final 22 years at Benedict.

Donna was set up on a blind date with Russell Heins, a gregarious airplane flying sportsman farmer, while she was teaching in David City.  Their first date was to the Nebraska State Fair.  By their third date, Russell declared that Donna was the girl for him, and that he thought they should get married.  Donna was taken aback at Russell’s early declaration, but sure enough, they married June 19, 1954.  They were happily together until his death in 2009, at age 85.  They had two daughters, Margo Fay and Joan Leslie.

In the early years, Donna and Russell rented dryland farms near Ulysses and Surprise, before moving to an irrigated farm at Benedict, Nebraska.  They raised mostly corn and in the 1960’s, cattle.  Years later, Russell wryly commented, “We sure didn’t need that (cattle raising) experience – we were broke and we didn’t know it.” In 1972, Russell transitioned to a career in life insurance, and they moved off their Benedict farm, building a house in York.  After Donna retired from teaching in 1990, she enjoyed flower gardening, travel, and socializing.

Donna spent her final years at Willowbrook Assisted Living, until a bad fall in June 2022, when she moved to Hearthstone nursing home.

Donna was a loving wife and mother.  She was honest and sincere, ladylike, and kind; a life-long people person.  She belonged to Baker’s Dozen, Alpha Delta Kappa, Pitch and Chatter, Benedict Beauties, and various Church and community groups.  She clipped newspaper articles about former students and kept every photo and letter they sent her.  She greatly enjoyed friends and family.  Neighbor children spent many a happy hour visiting Donna and Russ, snacking at the dining room table, or playing in their toy-stocked attic.  Drop-in visitors were always welcome; Russ quizzing, “What’s the News?” while Donna poured coffee.

Private service to be held at a later date. Memorials to York Adopt A Pet and the York First United Methodist Church.
​
​Condolences may be emailed to Metz Mortuary Messages will be given to the family.
Find our featured Mortuary in Family Services, Funeral Services and Grievance Services featured as a York, Nebraska Business in York Marketplace.
Location: Metz Mortuary | 109 South Lincoln Ave | York, Nebraska 68467 | Phone: 402-362-3351