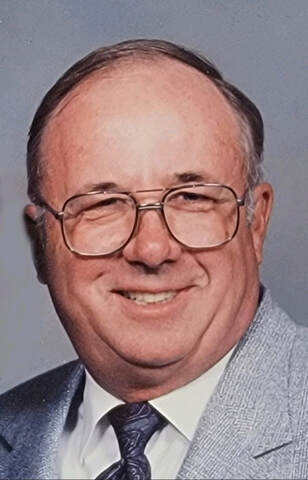 Donald C. Mason, age 89 of York, died Friday, June 24, 2022 in Lincoln, Nebraska. He was born June 9, 1933 in York to Clarence and Marie (Helzer) Mason. He graduated from York High School in 1951. On Feb. 22, 1953 he was united in marriage to Eldene Heiden at Emmanuel Lutheran Church and to this union five children were born: Diane, Rebecca, Nancy, Jon, and Thomas.

Don owned and operated Don’s Construction Company in York, specializing in custom built homes and commercial buildings. He first ran the company with a partner, Don Swanson of York, from 1962 to 1971 and then on his own (with help from Eldene) until he retired in 2003. The company built more than 100 homes and commercial buildings in York and surrounding communities.

Early in his life He was involved in the community as a Boy Scout leader and member of the York Jaycees. Don and his brother Darrel started a radio-controlled airplane flying club in York in the 1970s when the sport was still relatively new. Later he became active in Blue Birds Across Nebraska and was a strong supporter of their mission to increase the population of bluebirds and other native cavity-nesting birds. Don and Eldene owned a cabin on Sacks Lake near McCool Junction for 50-years and Don served on the lake’s board, including as president, for many years.

Don was an avid golfer and long-time member of the York Country Club. He was officially recognized for hitting a hole in one in 1974 while golfing with friends Don Watt and Herb Burnham in McAllen, Texas. He also enjoyed model railroading, which he shared with his family over three generations. He was an exceptional 10-point pitch player and, along with Eldene, belonged to an informal card club of good friends for many years.

He is survived by his children, Diane (Dr. Brad) Braasch of York, Becky (Allen) Pieper of York, Nancy Miller of York, Jon (Jodi Norris) Mason of Flagstaff, Ariz. and Tom (Keri) Mason of Omaha and grandchildren, Alan (Lisa Lynch) Steube and daughter Eva of York, Katie (Lawrence Herzog) Braasch and children Preston and Eliot of Olathe, Kan., Tara Homolka and children Whitley, Wylder and Wryker of York, Ted Braasch  (Amanda) and step-son, Preston of Lincoln, Conor Mason of Omaha and Ryan Micek and partner Samantha Poppingo and children Alice and Cooper of Omaha. He is also survived by his brother, Jim Mason of York.

He was preceded in death by his wife Eldene, parents Clarence and Marie, and siblings Janice, Jane, and Darrell.

Memorial services are scheduled for 2:00 pm, Thursday, June 30, 2022 at Emmanuel Lutheran Church. Inurnment will follow at Greenwood Cemetery in York. Cremation. No viewing or visitation. Memorials may be directed to Emmanuel Lutheran Church or Bluebirds Across Nebraska.
​
Condolences may be emailed to Metz Mortuary Messages will be given to the family.
Find our featured Mortuary in Family Services, Funeral Services and Grievance Services featured as a York, Nebraska Business in York Marketplace.
Location: Metz Mortuary | 109 South Lincoln Ave | York, Nebraska 68467 | Phone: 402-362-3351