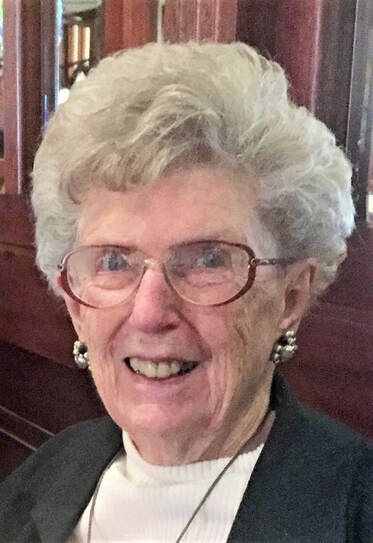 Diena Thieszen Schmidt, age 93 of Henderson, NE died Tuesday, October 12, 2021 at Henderson. She was born February 19, 1928 in Hamilton County, Nebraska, at home on the farm, four miles west of Henderson to John J. and Bertha Epp Thieszen.
Her childhood was like most other children, although she had a father who was very innovative and thus, the older children experienced many things such as irrigating, working in large gardens near the irrigation well, and having an airplane in the family.  She and her cousins were the first children to have the struggles of learning how to irrigate and disperse the water on the dry earth over an entire field.  Her fun moments were going to school, playing games, and going to grandparents’ homes.  There she could play with cousins and younger uncles and aunts.  She graduated from the 8th grade from District 73 West, and from Henderson High School in 1946.  In 1949 she graduated from Freeman Jr. College with a teaching degree.

Diena was baptized in May, 1945, by Elder A.W. Friesen, into the membership of the Bethesda Church and as an outward sign of her decision to be a follower of Jesus and his teachings.  Through the years she taught Sunday School, sang in the choirs, and for many years participated in Mission Circles, as well as being the Church Chronologist for the annual year book.
On November 25, 1949, Diena was married to Gordon LeAnder Schmidt, from Marion, South Dakota.  They met at Freeman Jr. College. The two years at college influenced all of the following years very dramatically.  Instead of teaching, they moved to a farm northwest of Henderson where they farmed until they moved to town in 1957.  When the Edigar Brothers were building Bethesda Church, they also built Gordon and Diena’s home in which she lived for 64 years before moving to Legacy Square in July, 2021.  They celebrated their 65th wedding anniversary at the Care Center in Henderson where Gordon had been a resident for 1 ½ years.  Gordon passed away April 8, 2015.

Diena’s interests and hobbies remained the same through many years.  She learned to crochet while a college student and continued to do so throughout her life.  She made countless doilies, bedspreads, tablecloths, and over 250 afghans.  She also enjoyed playing many games, but her favorites were word games, crossword puzzles, Scrabble, crypto quotes, etc.  She enjoyed organizing many class reunions, family reunions, serving as registrars at conferences, organizing the “Henderson to Holland” history book, several cookbooks, the History of the Northern District in celebration of their 100th anniversary, and writing her own biography.  She was a member, and served as chairman of the Northern District Program Committee from 1973 to 1979.  She was the second woman to be elected to an elective office for the conference.

Over the years, she hosted many guests, some for a short term, and some for months.  The Schmidts’ contacts have come from all over the world as Gordon’s work took him to many foreign places beginning in the 1960s.  She also enjoyed canning many quarts of garden produce cooking, and baking many breads, zwiebach, and pies. – In general seeing the smiles on the faces of those who enjoyed her baking and cooking.
​
Three children were born to Gordon and Diena:  Philip Arden (Roberta) March 22, 1951; Ivan Lee August 14, 1952; and Jean Carol (Terry Lancaster) May 26, 1955.  She is also survived by four grandchildren; Grant (Jami) Schmidt of Henderson, Halie (Aaron) Schmidt Smith of Maize, KS, Katie (Bryan) Lancaster Kelly of Norman, OK and Trevor (Tiffany) Schmidt of Seward, NE. Great-grandchildren include Austin and Taylor Schmidt; Asher, Amrie, and Hagen Smith; Cameran and Connor Kelly; Ethan, Mason, and Nolan Schmidt.  Siblings include Rachel Graber, Parker, SD, Albert Thieszen, Henderson, NE, Lois (Ron) Preheim, Newton, KS, and Zella (John) Penner, Plymouth, NE, and well as several sisters-in-law.  She was predeceased by sister-in-law Jean Thieszen and brother-in-law Jerry Graber, as well as her parents.

Graveside services will be held at 9:45 am, Friday, October 15, 2021 at the Bethesda Mennonite Cemetery, northeast of Henderson followed by a 10:30 am Memorial Service at Bethesda Mennonite Church in Henderson. The memorial service will be livestreamed on the church’s website at http://bethesdamc.org/. Memorials may be directed to the Bethesda Library Fund. Visitation will be held from 1-9 p.m. Thursday, with the family greeting friends from 7-9 p.m., at the mortuary in Henderson.