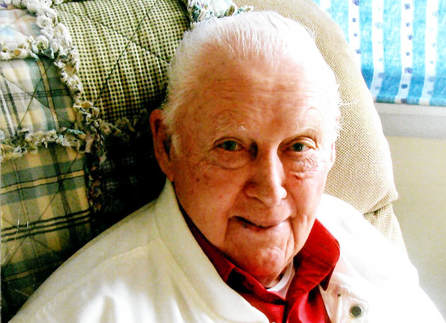 Denzil Elvon McClatchey, age 97, of York, NE, went to be with his Heavenly Father Saturday, August 11, 2018 at York.  He was born on June 29, 1921 in Palisade, NE (Rural Hayes County) to Perl Jefferson and Goldie (Brown) McClatchey. On November 22, 1942 Denzil was united in marriage to Marjorie Edith Brunk in New Rochelle, New York.

He is also survived by his great-grandchildren Landon Zimmer of Kansas City, KS and Savannah Zimmer of Lincoln; Daniel Meradith and Brandon Meradith both of Rock Springs, WY, and Haiden Hild of Stromsburg, NE; Skyler Bybee and Paityn Bybee both of Omaha; Layne, Braxtyn, and Eastyn Epp, all of Nebraska City; Grace, Madelyn, Emma, and David Buttermore all of Omaha, NE; Sierra Bluhm and Dalton Bluhm both of Milford, NE. Great great-grandchildren include Braxton Schons of Pleasant View City, UT, and Zion Bluhm of Milford. He is also survived by his brother Jim McClatchey of Denver, CO, sister-in-law Velda McClatchey of York, and brother-in-law Paul Neff of York as well as many other family members.

The family would like to extend their appreciation to Gay Chambers, Averl Henglefeldt, Jan Tiffany, AseraCare Hospice, and York General Home Healthcare for their excellent care.

Funeral services will be held at 10:00 am, Friday, August 17, 2018 at the First United Methodist Church in York with the Reverends Art Phillips and Mark Hartley officiating.  Interment with military honors will follow in York’s Greenwood Cemetery. Visitation will be from 1:00 – 8:00 pm Wednesday, August 15 and 9:00 am – 8:00 pm Thursday, with the family greeting friends from 6:30 – 8:00 pm at the mortuary. Memorials may be directed to the Wounded Warrior Project or to AseraCare Hospice.