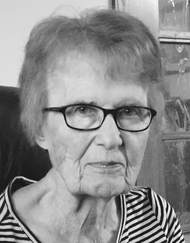 Demaris N. Jacobson, daughter of Donald and Norma (Light) Johnson, was born August 22, 1935, in Polk, NE. She was baptized at Immanuel Lutheran Church. Demaris died Friday, April 27, 2018 in York, NE.
In 1943, her family moved to Osceola. She was confirmed at St. Paul Lutheran Church and was a 1952 graduate of Osceola High School. Demaris graduated from the University of Nebraska in 1956 and taught in the Lincoln and Osceola public schools. She was a long-time member of Chapter AR, P.E.O.
On April 12, 1958, Demaris and David Jacobson of Stromsburg were married. They were the parents of a daughter and son. David died in 1989 and Demaris moved to York in 1992.
Survivors include her daughter, Annie (Barry) Redfern of York, her son Ward (Steph) Jacobson of Minneapolis, grandchildren Samantha Redfern and Seth Jacobson, and brother Brad (Barb) Johnson of Lincoln.
Demaris was preceded in death by her parents, Donald Johnson and Norma Johnson DeLand, husband David, and step-father Ralph DeLand.
Private graveside services will be scheduled at a later date. There will be no viewing or visitation as it was Demaris’s wishes to be cremated. Memorials may be directed to the family for later designation.