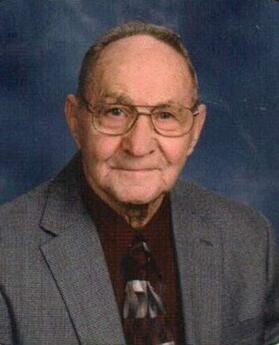 Delphin was born on March 27, 1926 in the family home on their farm east of McCool Junction. His parents were Frederich Wiemer and Alvina (Epke) Wiemer. He was baptized April 11, 1926 and later confirmed in 1939 at St. John’s Lutheran Church in rural Waco.

He attended Country School District 7 (by the Blue River), then St. John’s Lutheran School until 8th Grade. He then attended Exeter High School and graduated in 1943.

Delphin was married on March 9, 1951 in Lincoln to Betty Jean Lemmon. He farmed and contracted out for baling until he was drafted into the US Army in 1950. He was 1 of 9 1st draftees for the Korean War in York County. He served in the Korean War and fought near Pork Chop Hill and Hill 747. During his duty he was promoted to Sgt. 1st Class, became a squad leader and received the Bronze Star, among other honors.

Following Service in the Army Delphin returned to York and worked for McAllister Transfer and Beeline Motor Freight for 35 years and was a proud member of the Teamsters Union. He was an Executive member of the American Legion, Color Guard and a VFW member. He was also active as a youth baseball coach in the community. He served as an Assistant Scout Master for the Boy Scouts for 8 years. During his tenure 10 boys reached the rank of Eagle Scout, including his son. Several times he took his vacation to work with the boys at Humbolt Scout Camp.

Delphin worked for York County Fairgrounds for 28 years beginning in 1988. He served as the building maintenance person until his death. He was responsible for setting up and taking down for the yearly York County Fair. He was very proud of the condition of the Fairgrounds and how well they looked. He was a member at Emmanuel Lutheran Church in York. He was an avid bowler, bowling in York and in numerous tournaments for 60 years since 1954.

Funeral services will be held at 2 p.m., Wednesday, July 13, 2016 at Emanuel Lutheran Church in York with the Reverend’s Mike Neidow and Ben Kaiser officiating. Burial will be in York’s Greenwood Cemetery. Visitation will be from 1 - 9 p.m., Monday and then from 9 a.m. - 9 p.m. Tuesday at the mortuary. In lieu of flowers, memorials may be directed to Emmanuel Lutheran Church and the American Legion. ​
Condolences may be emailed to Metz Mortuary Messages will be given to the family.