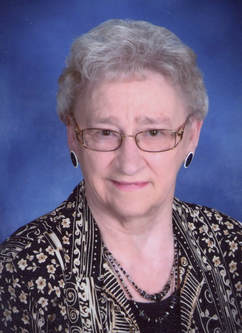 Delpha Jean Pracheil, age 85 of York, NE died Monday, October 8, 2018 at York. She was born March 31, 1933 at Exeter, NE to William and Ina (Taylor) Mullner and was a longtime member of the First United Methodist church in York.  On October 30, 1950 she was married to Kenneth Pracheil at Belleville, KS.

Delpha enjoyed being a member of the York Senior Center, playing ten point pitch, “Guess It”, cooking and baking Kolaches for friends and family. She also cooked for both Exeter and York Schools alike. She loved her cats, dogs, her children, grandchildren and great grandchildren.

She was preceded in death by her parents, husband, twin granddaughters Kimberly Ann and Kelly Ann, brothers-in-law Leonard Deterding and Francis Pracheil.

Funeral services are scheduled for 2:00 p.m., Monday, October 15, 2018 at the Metz Chapel in York with the Reverend Art Phillips officiating. Burial will be in York’s Greenwood Cemetery. Visitation will be from 1-8:00 p.m., both Saturday and Sunday with her family greeting friends from 3-5:00 p.m., Sunday afternoon at the mortuary. Memorials may be directed to the First United Methodist Church in York.

Condolences may be left for the family at www.metzmortuary.com. Metz Mortuary in York is handling arrangements.