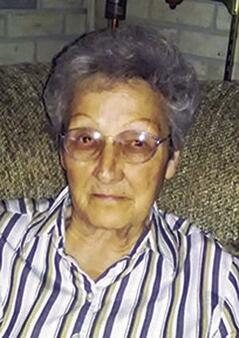 Deloris Irene Georges, age 84 of York, died Friday, June 9, 2017 at the Midwest Covenant Home in Stromsburg. She was born Sept. 8, 1932 to Fred and Angie Mahala (Woods) Vice in Verdon. On July 14, 1950 Deloris was united in marriage to Lyman M Georges at Auburn.

Deloris was a member of the New Life Church of the Nazarene in York where she taught Sunday School and was very involved in many church activities. She enjoyed singing, quilting, sewing, cooking and baking. For many years, she was in bowling league and she also liked playing card games (Farkle). Most of all, she loved taking care of her family and enjoyed the time she spent with her children, grandchildren and great-grandchildren.

She is survived by her sons, Rick (Sherri) Georges of Stromsburg and Randy (Jacqua) Georges of Waco; grandchildren, Matt Georges of York, Erin (Barry) Smith of Long Beach, Calif., Carle (Ryan) Conard of Thayer, Jamie Tiedeman of Omaha, Carl (Amanda) Georges of Lincoln and Justin (Chelsey) Georges of Roca; great-grandchildren, Hannah, Aayeshia, Sergio, Dereck, Domanic, Delaney, Logan, Blakelee, Brinlee, Bentlee, Easton and Presley. She is also survived by her siblings, Noel (Charlene) Vice of York, Lloyd (Bobbi) Vice of Henderson and Hala Angie (Jim) Conner of York and several nieces, nephews and cousins.
Deloris is preceded in death by her parents; husband and siblings, Floyd, Gletha, Esther, Melva, Phyllis, Lester, Ellis and Gertrude.
​
Funeral services will be held at 10 a.m. on Wednesday, June 14, 2017 at the New Life Church of the Nazarene in York. Burial will follow at Greenwood Cemetery, York. Memorials may be directed to the family. Visitation will be held from 1 – 8 p.m. Monday and Tuesday from 9 a.m. – 8 p.m., with family greeting friends Tuesday evening from 5 – 7 p.m. at the mortuary.