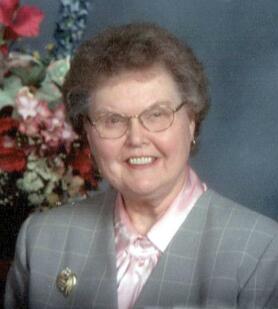 She was born on Sept. 2, 1930 to George and Wilhelmina (Minnie Kanzmeier) Woerlen in Johnson. She was baptized on Oct. 4, 1930 at Zion Lutheran Church at Johnson. Delores married Carl Franzen at Johnson on Sept. 10, 1950. They lived in Pawnee City until 1964, when they moved to York.

Delores worked as a secretary in Lincoln prior to marriage. During her children’s college days, Delores was the Presbyterian Church secretary for nine years. Her other years were devoutly spent as a homemaker, mother, seamstress and gardener.

Delores was known in her family as an excellent cook and baker. She canned, froze and processed the produce that was harvested from her husband’s and her huge garden. Her pies were to die for and she once received honors for an apple pie in a contest.  The family often requested her canned meat. She was an avid gardener.

Throughout her entire married life Delores corresponded with and got together with her “Round Robin” friends and their families. These lifelong friends were from her church and high school.

Delores sewed many of her and her family’s clothing. Later, she became a master quilter. She always expanded her knowledge of piecing quilts and combining color by participating in many classes.  She was a member of the York Quilt Guild.

Delores served on many church boards: Lutheran Women’s Missionary League, both locally, district wide, and nationally. She taught Sunday School, Vacation Bible School, and played the organ. She served on the kitchen committee for funerals and church events. Delores was a longtime Extension member and Blood Mobile volunteer. She and Carl served as Lamp Lighters for then AAL (Thrivent).

Delores and her husband camped throughout the United States with their family. They continued traveling after the family was raised. They toured the United States, Canada, Europe and the Middle East. They loved participating in Fun Club and York Senior Center events. Delores loved her family and enjoyed following her grandchildren’s activities.

Delores was preceded in death by her parents and brothers-in-law, William Franzen and Loren Gebers.  Also, sisters-in-law and their spouses, Anna LaFrance and Pauline Grulke and an infant grandson, Jeffrey Franzen.

Funeral services will be held at 10 a.m. on Wednesday, May 6, 2015 at Faith Lutheran Church in York. Interment will follow at Greenwood Cemetery in York. Visitation will be held from 1-9 p.m. Monday and from 9 a.m. - 9 p.m. on Tuesday with the family greeting friends Tuesday from 7-8:30 p.m. Memorials may be directed to Mission Central, Orphan Grain Train or to the family for later designation.
​
Condolences may be emailed to Metz Mortuary Messages will be given to the family.