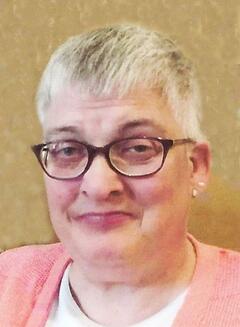 She was born April 24, 1959 in Henderson to Dennis Brackhan and Myrna Landenberger. Debra was baptized and confirmed at Zion Lutheran in Hampton and attended Hampton Lutheran School. She graduated from Bradshaw High School in 1978, and took classes at Hastings Central Community College.

Debra’s family meant the world to her. She loved when her nieces and nephews would come and visit her, and also enjoyed spending time with her co-workers, considering them a part of her family. She worked at Arby’s, Valentino’s, York General Hearthstone and Wal-Mart all in York. She had numerous friends and enjoyed greeting people wherever she worked.

She was preceded in death by her father, Dennis Brackhan (1974); step-fathers, Rex Obermier (2006), and David Staehr (2014) and grandparents, Herman and Dora Brackhan and Orville and Mae Landenberger.

Funeral services were held at 10 a.m., Tuesday, Feb. 9, 2016 at Emmanuel Lutheran Church in York, with Pastors Mike Neidow and Ben Kaiser officiating.  Interment was at the Zion Lutheran Cemetery in Hampton following services. Visitation was from 5 – 9 p.m. Sunday and then again 9 a.m. – 9 p.m. Monday with family greeting friends between 6:30 – 7:30 p.m. that evening at Metz Mortuary. Memorials may be directed to the Lions Eye Bank, or to the family for later designation.  ​