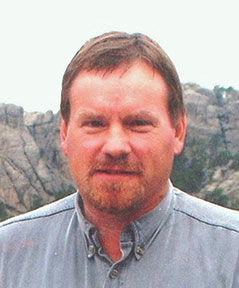 David James Swartz, age 55, of Henderson, went to be with his Heavenly Father on Monday, March 27, 2017 in Lincoln.

On a bitter cold day, in answer to the prayers of Marvin Dean and Delores Suzanne (Ronne) Swartz, their first born son arrived in Geneva on Dec. 28, 1961.

He graduated from Fairmont High School in 1980 and then attended Southeast Community College at Beatrice/Milford where he received his Associate’s degree in Agri-Business. He then returned to the family farm. On May 18, 1996, Dave married the love of his life Debra Lynn Bright at the Fairmont Community Church, where they were members.

He loved farming with his dad and granddad and spending time on his Harley-Davidson motorcycle with Deb. Dave could fix nearly anything with a little bit of wire and some duct tape. He had a well thought out reason for everything he did. Holding a special place in his heart was his beloved yellow labrador retriever Rocky, who would follow him to the field and also welcome him home with great anticipation after a long day on the tractor.

Dave loved all of God’s creatures, especially the animals he cared for on the farm. He was a member of the “Keep Em Growing” 4-H Club, where he loved showing sheep and hogs and received many trophies and ribbons.

He had an affinity for anything with a motor in it, enjoyed history (especially the World War II era) and all genres of movies and music. He had an excellent memory and was a walking encyclopedia with a great thirst for knowledge.  Among his favorite meals were Deb’s “famous” spaghetti, a slice of homemade pizza (Valentino’s was a close 2nd), and a warm piece of apple pie with a scoop of vanilla ice cream on top.

After being diagnosed with Parkinson’s Disease in 2004, he continued to farm until 2013 when he entered the CountryHouse Residence in Lincoln. Dave was a kindhearted, patient, respectful and devoted husband, son, brother, brother-in-law, uncle, cousin, and friend.

Those left to celebrate Dave’s life include his wife, Deb of Henderson; mother, Delores “Dee” Swartz of Fairmont; brothers, Phillip (JoDeen) Swartz of Exeter and Merle Swartz of Reno, Nevada; aunt, Kathy (Swartz) Rudd of Omaha; niece and nephew, Kelsey and Tyler Swartz both of Lincoln and nephew, Trevor Swartz of Exeter. He is also survived by his mother-in-law, Janet Bright of Fairmont; brother-in-law, Steven (Debbie) Bright and niece, Destiny Bright all of La Crescenta, Calif.; sister-in-law, Sandra Bright and significant other, Jerry Bello of Stamford, Conn.; father-in-law, Frank Bright of Carlsbad, Calif. along with many other relatives and a host of friends.

Memorial services are scheduled for 4 p.m., Friday, April 7, 2017 at Metz Mortuary with the Reverend Tim Hull officiating. Dave’s wishes were to be cremated. In lieu of viewing and graveside services, book signing will be Thursday, April 6, 2017 from 1 – 7:30 p.m. His family will greet friends and neighbors from 5:30 - 7:30 p.m. at the mortuary on Thursday evening. Book signing will be at 1 p.m. prior to services. In lieu of flowers and plants, memorials may be directed to the Parkinson’s Unity Walk – Walker: Deb Swartz for Team Dave’s A’maizing’ Field of Dreamers (http://support.unitywalk.org/goto/2017DaveSwartz  - April 22, 2017 Central Park – New York), the CountryHouse Residence for Memory Care in Lincoln. Family choice undesignated memorials will be used in Dave’s memory for Ag scholarships at SCC, Beatrice and towards the purchase of trees to be planted at the Fillmore County Fairgrounds.  Directly following the service a Celebration of Life reception will be held at the Holthus Convention Center.​