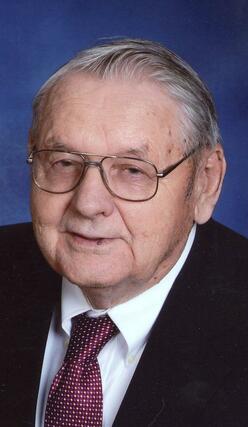 He was born September 5, 1931 to Arthur and Alpha (Schwarting) Blum in York. On August 13, 1967 he married Sarah J. Duncan at St. John’s Lutheran Church, in Waco. To them two sons were born, Doug, and Greg. Darrell served his country in the Air Force, and was a long time farmer in the Waco area. He was an elder of St. John’s, trustee, and a member of the Lutheran Layman’s League. Darrell enjoyed traveling, playing cards, and spending time with his family, especially his grandchildren.

Darrell is preceded in death by his parents, brother, Larry, and sister Marlene.

Funeral Services are scheduled for 10:00 am Saturday, May 21, 2016 at St. John’s Lutheran Church in Waco with the Reverend Mike Neidow officiating. Burial will take place in the St. John’s Cemetery. Visitation will be held from 1pm-9pm on Thursday, May 19, and 9am-9pm Friday with family greeting friends that evening from 7-8pm at the mortuary. Memorials may be directed to Mission Central, in charge of Gary Thiess, or to St. John’s Lutheran Church in Waco.​