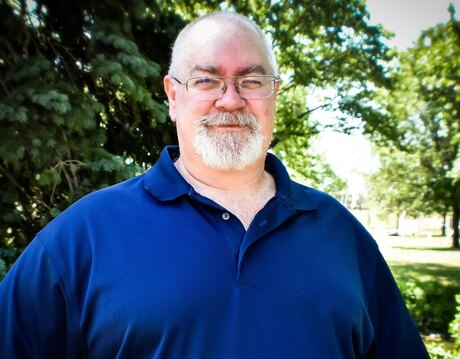 Dale L. Rhodes age 57 of Gresham, NE died Thursday, April 21, 2022 at York, NE. He was born June 2, 1964 in Lincoln, NE to Robert and Shirley Jean (Lloyd) Rhodes. On August 9, 1985 he was married to Joyce E. Schall in York. Dale was a security guard with Securitas and also managed the Sun Theater in York for many years. He enjoyed collecting baseball cards, football helmets, stamps, and coins. He enjoyed playing video games and traveling to the Black Hills of South Dakota. Dale loved his family, especially his kids and his dogs.

He is survived by his wife Joyce, his son Ben Rhodes, and daughter Dalayni Rhodes, all of Gresham, his nieces Kristina Bryant “Sissy” of York and Katie DeWitt and her children of York, his dogs Harley, Bear, Izzy, Jerzee and Kono. He is also survived by his best friends and brothers Marvin Tuttle of Beatrice, Bruce Tesarek of Waverly, and Kevin Roberts of Rising City, Ben’s biological family: Sandra Robbins, Frank Waters, Tommy and Kristen Moore, Dylan Rollins, Conner Rollins and Thea Rollins, all of Monroe, NC, his sisters Donna Bryant and Teresa Rhodes both of York, sister-in-law Audrey Schneider of Gresham, and many other nieces, nephews, and in-laws.

He was preceded in death by his parents, father and mother-in-law Larry D.  and Phyllis E. Schall, son Rocky Adler, brother-in-law Jody Schall, nephew Korey Schall, aunts, uncles, and his dogs: Bandit, Cuddles, Daisy, Ellie, Frankie and Ginny.
​
Memorial services are scheduled for 10:00 am Thursday, April 28, 2022 at the Metz Chapel in York with the Reverend John Nellessen officiating. Inurnment will be in Gresham’s Cedar Lawn Cemetery. Memorials to the family, York Adopt-A-Pet or to the American Diabetes Association. Dale has been cremated, no viewing, but his family will greet friends from 6-8pm on Wednesday at the mortuary, and his register book will be available to sign all day Wednesday. Dale's service will be livestreamed at: www.youtube.com/channel/UCl1ffBwglpCqu7nKkx42SzQ