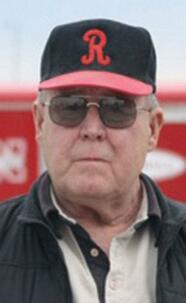 Dale attended St. John’s Lutheran Church and School, and was confirmed on April 10, 1960. He attended York High School, graduating in 1964. After graduation he started working for William Pflug at Pflug Grain and Lige Levitt at E.S. Clarke Lumber. When Pflug Grain transitioned to the Co-op, he continued working several years for the Co-op.

Dale joined the Army National Guard at York Sept. 1, 1965, and was a member of ‘F’ Company ‘C’, 67th Support Battalion, and the 67th Infantry Brigade, and was honorably discharged in 1972.

Dale loved to farm. He farmed with his father, and they eventually farmed together. He also trucked for the Blum family for several years, and occasionally for other families until his health began to fail. Dale is a past president of the Lincoln School PTA, and enjoyed being a member of the American Legion, making many friends along the way.

There was no greater love than the love Dale had for his family. He wouldn’t have missed a ball game if at all possible. He was never ashamed to show his emotions when it came to the outstanding accomplishments of his family, and we love him more because of the love he showed us every day.

Dale is survived by his wife Sherry of York; daughter Cari Anne (Tim) Fricke of Lincoln; son Andrew Dale (Leslie) Reetz of Elkhorn; grandchildren, Nathan and Allison Harless, children of Cari, Jakson, Will, Drew, and Garet, children of Andrew. He is also survived by his great-grandson Korbin Harless, along with several nieces, nephews, and cousins.
He preceded in death by his parents and one granddaughter.
​
Funeral services are scheduled for 10 a.m., Monday Sept. 11, 2017 at St. John Lutheran Church in Waco, with the Reverend Matthew Mau officiating. Military honors will take place at the church following services. Private family inurnment will be held at a later date. Visitation will be held 1-8 p.m., Saturday Sept. 9, and 1-8p.m., Sunday, Sept. 10, with the family greeting friends from 2-4 on Sunday at the mortuary in York. Memorials may be directed to St. John Lutheran Church, or to York Adopt-A-Pet.